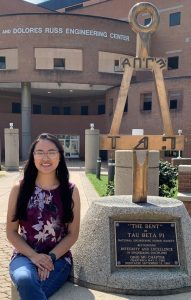 Kara Combs is pursuing a master’s degree in industrial and human factors engineering at Wright State.

It is the third award Combs has received from Tau Beta Pi, the national college engineering honor society. Previously, she won a highly competitive Tau Beta Pi fellowship for advanced study and in 2019 received an undergraduate scholarship.

After being initiated in the fall of 2018, Combs served as the Wright State Ohio Mu chapter’s corresponding secretary and vice president each for one year. Currently, she is a chapter advisor and a member of the Tau Beta Pi Student Advisory Board.

Tau Beta Pi Laureates are gifted engineering students who have excelled in areas beyond their technical majors. The program is designed to further the society’s mission to recognize academic and professional excellence rooted in personal integrity.

“Kara is a well-rounded student who exhibits exemplary leadership through involvement with TBP, IISE [Institute of Industrial and Systems Engineers] and the Dean’s Student Advisory Board,” Tau Beta Pi said in announcing the award. “In addition, she coached a middle school Academic Challenge team for three years, leading them to three top 10 finishes at the Ohio state championships.”

Combs was one of only four students nationally to be named Laureates this year and will receive a $2,500 award and a commemorative plaque. A total of 118 Tau Bates has been named Laureates since 1982.

She was also one of 28 engineering students from 336 applicants selected for a Tau Beta Pi graduate fellowship in 2021-22, receiving up to a $10,000 stipend for advanced study.

The fellowships are awarded for high scholarship, campus leadership and service and the promise of future contributions to the engineering profession. Combs received the Harold M. King Fellowship, which is given to a student “whose participation in his/her technical society is judged worthy of special mention.”

Travis Doom, Ph.D., distinguished professor and associate dean of the College of Engineering and Computer Science, said Combs is everything you would hope for in a student.

“She is skilled academically, without question,” said Doom, who serves as primary faculty advisor for Tau Beta Pi. “But just as importantly, she is a tireless advocate for our students, programs, college and the profession. Whenever a volunteer is needed to help others, Kara is there. I can think of no graduating student more worthy of being selected a Laureate by the preeminent engineering honor society.”

Earlier this year, Combs received the James W. Barany Student Award for Excellence from IISE. The award recognizes undergraduate students who have brought distinction to industrial engineering at their universities.