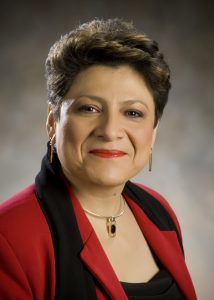 The University of Panama has honored Damaris Serrano, Ph.D., associate professor of Spanish at Wright State University, with a national award for her book on Panamanian literature.

It was part of a literary contest titled “Octavio Méndez Pereira, Premio Único 2021″ in honor of Ricaurte Soler, a Panamanian philosopher and historian of continental prestige.

Serrano’s book “Interdependencies: Globalism, Discourse and Identity in Panamanian Literature” was submitted under a pseudonym as required by the contest rules.

“I have always thought that writing heals, especially when the literature and culture from Latin America and my small country is so vibrant, dynamic, profound, and just a testimony of the human condition everywhere else,” said Serrano, who is a native of Panama.

Each year the University of Panama honors a writer who was also a former faculty member of the university. The award rotates annually by genre, with essay being the category in 2021. The award is accompanied by a cash prize, a certificate and publication of the winning submission.

Serrano says she dedicates her writing to her students at Wright State; students at the University of Panama; the late Ariel Barría Alvarado, whose collection of novels and short stories she studies in her book; and two other Avangard and Postmodern storytellers from Panama.

“As I always say to my students at Wright State, ‘Let’s get to know your country — los Estados Unidos — through Latin America,’” said Serrano. “I hope that with my book I have contributed to open the consciousness here and there because in a world like the one we live, the only way to survive is finding our points in common, our shared identities.”

Serrano said nearly all of the books she used to research “Interdependencies” came from Wright State University Libraries and interlibrary loans.

“The team at the Dunbar Library is amazing,” she said. “They are very knowledgeable and they know how to get anything from anywhere.”

In 2018, Serrano received the Republic of Panama’s highest literary honor for the third time. She was the recipient of the Ricardo Miró National Award in the category of Essay for her work titled “Panama Post/Modernity/Post: (The journey of a Poetic-Narrative Strategy).” She also won the award for her essays in 2005 and 2013.

The competition, created in 1942, is named after Ricardo Miró, the national poet of Panama. It is designed to promote, preserve and disseminate Panamanian culture in the context of the Americas.

Serrano grew up in David, a scenic Panamanian town tucked between the mountains and Pacific Ocean and part of an agriculturally rich province. She attended Catholic elementary and middle schools and then a public high school, where she learned four different languages.

Serrano joined the Wright State’s College of Liberal Arts in 2005.