The unassuming one-story, red-and-white brick house sits in a quiet, tree-lined neighborhood in Springfield. But the Gammon House has a rich history.

Built in 1850, Gammon House is one of only three existing Ohio stops on the Underground Railroad owned by free persons of color.

The house has benefitted from the tender loving care of Wright State University urban affairs alumnus Dale Henry, who serves as president of Gammon House Inc. and main groundskeeper of the property.

“It’s a labor of love,” said Henry. “It’s unique to this community because we don’t have many landmarks associated with the African American community in Springfield that are left. It is really special.”

The Underground Railroad was an informal network of secret routes and safe houses used by enslaved people in the 19th century in the United States to escape to freedom.

The Gammon House was part of the Underground Railroad but in later years fell into disrepair and was in danger of being torn down.

Enter Henry and a team of like-minded preservationists. Restoration of the house began in 1998. The roof, walls, doors and windows were all replaced and a new furnace was installed. The restoration was completed in 2017.

The house has since been transformed into a museum. Hanging on the walls is artwork related to the Underground Railroad, including quilt displays. Text-filled panels with photographs detail related historical events, including the Civil War and the Emancipation Proclamation.

“So many people should be educated on this period of history,” said Henry, adding that efforts are being made to get the Gammon House on the National Register of Historic Places. 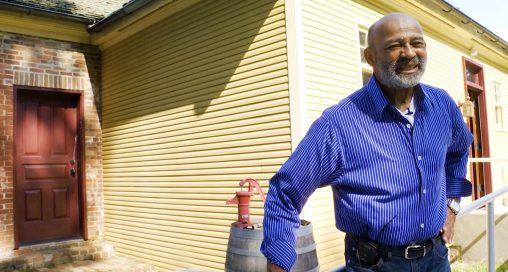 Overseeing the Gammon House is just one of many ways Wright State urban affairs graduate Dale Henry gives back to the community. (Video by Kris Sproles)

Henry, 71, grew up in Springfield. After graduating from Springfield South High School in 1968, he began working at General Motors’ Harrison Radiator plant in Dayton, making parts for air conditioners. Six months later, he was drafted into the U.S. Army, serving as an acting sergeant in a Basic Training company in New Jersey.

“I thought it helped to make a real man out of me,” Henry said. “There was some discipline I needed.”

In 1971, he returned to his job at GM and later earned an associate degree in landscaping from Clark State Community College.

From 1990 to 1997, while still working at GM, Henry served two terms as a Springfield city commissioner. During that time, he also served as both mayor and assistant mayor.

Henry said he decided to run for office because he wanted to do things that would generate some positive publicity for his hometown.

“I thought I could make a difference,” he said. “That was the bottom line.”

Henry retired from GM in 1999 at age 49 and earned his bachelor’s degree in urban affairs from Wright State.

He later became deputy director of the Clark County Board of Elections for three years. Then he served as regional liaison for the Ohio secretary of state until 2010.

“Ever since I went to Wright State I’ve been doing things in the community,” he said. “My education at Wright State gave me the motivation and the energy to pursue a future in community building.”

For example, Henry converted an abandoned railroad line into a bike path that is now part of a paved trail that runs to Cincinnati.

Henry has used his knowledge of landscaping to beautify the Gammon House, putting in a flower garden and installing a “Positivity Bench” to inspire positive thoughts, thanks to the generosity of a local women’s group.

“It’s real peaceful to be here,” Henry said. “Over the years I’ve been real proud of the fact that I could be able to keep the place looking the way it should look.”