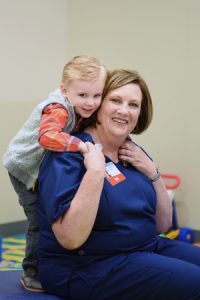 Longtime Dayton Children’s Hospital neurologic pediatric nurse Diane Quirk has been honored by the Wright State University School of Nursing with a Cameo of Caring Award.

The award recognizes Quirk as an unsung heroine and outstanding member of the nursing community.

“Over the past 42 years, she has built a system for the inpatient neurology team that ensures no child is missed after consult sign-off or discharge from service,” said Gmeiner.

The awards, which are in their 20th year, represent exceptional nurses and raise money for nursing scholarships at Wright State. Over the years, Cameos of Caring ceremonies have recognized hundreds of nurses in the greater Dayton area.

During a Nov. 19 ceremony at the hospital, Quirk was praised by physicians as an invaluable member of the neurology team with unique abilities to coordinate care and educate patient families.

“Regardless of where the event occurs, our Cameos of Care recipients engrave compassion upon the hearts and lives they touch,” said Ann Stalter, Ph.D., professor and chair of nursing at Wright State. “This event gives us pause to celebrate how very special Diane Quirk is to the lives of children and their families.”

Stalter and Gmeiner applauded the Quirk family for supporting Quirk, noting how all nurses need the strength of their families to help them cope with the demands of a nursing career.

While Cameos of Caring was established by the University of Pittsburgh, the Wright State program was initiated by Patricia Martin, dean emeritus. Martin led the then Wright State University–Miami Valley College of Nursing in the early 2000s and hosted the event on campus in the Student Union. She felt it was important to celebrate nurses who consistently demonstrate a comprehensive understanding of the “art and science” of nursing red-carpet style since they represent excellence in nursing care.

From 2011–2021, under the leadership of Deans Rosalie Mainous and Deborah Ulrich, the event was hosted at the Schuster Center in downtown Dayton.

“Wright State and Dayton Children’s Hospital collaborate to provide excellence in nursing care while supporting nursing education,” said Stalter. “We look forward to continuing this tradition in the years ahead and greatly appreciate Dayton Children’s support of the program.”