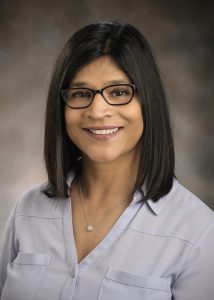 Madhavi Kadakia has been appointed vice provost for research and innovation at Wright State.

Madhavi Kadakia, Ph.D., has been appointed vice provost for research and innovation at Wright State University.

Kadakia has served as interim vice provost for research since July 1.

“Today, I am honored to remove the interim from her title and in recognition of the important role her position plays in establishing new directions and relationships for Wright State University to announce her appointment as vice provost for research and innovation,” interim Provost Oliver H. Evans, Ph.D., said in an email to the university community.

As interim vice provost, Kadakia has displayed the managerial skills and the strategic vision to serve Wright State as it sustains its current excellence as a Research 2 University, Evans said.

“More importantly, Dr. Kadakia has a vision for moving Wright State forward in several strategic areas of which one of the most significant is the development of a collaborative relationship between the multiple directorates within Wright-Patterson Air Force Base and Wright State University,” Evans said.

Under her leadership, the department established the Bachelor of Science Program in Biochemistry and Molecular Biology.

Kadakia also serves as the associate director of the Center for Genomics Research.

She joined the Wright State faculty in 2002 and was promoted to professor in the Department of Biochemistry and Molecular Biology in 2013.

Kadakia is an internationally recognized cancer researcher with a history of federal funding. She has published numerous peer-reviewed articles and trained postdoctoral fellows and graduate and undergraduate students.

Much of her research, with funding from the National Cancer Institute, has focused on the identification of signaling pathways that play a role in cancer and its development.

A second major research area of focus has been identifying biomarkers that can help differentiate stages of cancer and potentially shed light on personalized treatments for patients. As a co-investigator on a multi-university research initiative, funded by the Office of Naval Research, Kadakia is involved in the identification of biomarkers associated with physical training.

She served as a co-organizer for the international scientific meetings and as a reviewer for the National Institutes of Health, Department of Defense and numerous prominent scientific journals.

Kadakia also led the university’s Research Task Force during the coronavirus pandemic and was instrumental in bringing researchers back to campus.

As vice provost for research and innovation, she will continue to work closely with all academic and administrative units across the university.

Kadakia completed the prestigious Hedwig van Ameringen Executive Leadership in Academic Medicine (ELAM) Fellowship Program for Women. She served as a visiting research scholar at Nottingham University and the Leicester Medical Research Council in the United Kingdom in 2011.

She has held several national leadership positions, including as a steering committee member on the Association of American Medical Colleges Group on Research Advancement and Development committee, as a board member for the Dayton Veterans Affairs Research Foundation, and as an elected member of the Board of Directors of the Association of Medical and Graduate Departments of Biochemistry.