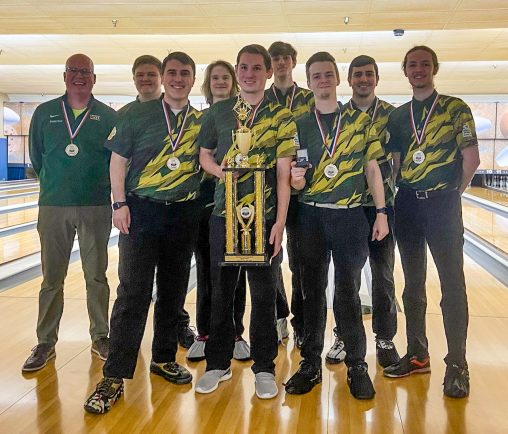 “For being so far from campus, we had a lot of fans there,” said head coach Jeremy Fleck. “The parents came out and so did relatives of players from Chicago.”

The tournament was open to the top men’s club bowling teams nationwide. There were 22 teams divided into four pools.

The Raiders won their pool, advancing to the winners’ bracket. In the final, they were down two games to none in a best-of-five match against the University of Wisconsin-Stout but bowled their way to victory.

“We beat a lot of good teams on the way to the championship,” Fleck said.

The club team’s previous best finish nationally was second in 2018.

“It was a long time coming, especially for the seniors,” said Fleck, a 2009 Wright State marketing graduate.

“This was the first season that we’re back with a full slate of tournaments and a full club championship,” Fleck said.

Fleck said the team was deep in talent. Five at a time bowl in a match, but having three good substitutes who played in other matches kept the team fresh.

“People look at bowling as an individual sport, but we truly are a team,” said Ciero, the team’s co-captain. “Some guys had outstanding individual performances, but everybody pitched in, helping each other with encouragement.”

Ciero, the outgoing president of the Student Government Association, added, “This has been in the making the past three or four years. The men’s team has accrued talent, and we have a great incoming freshman class. This is just the beginning. We’ll have better results next year and continued improvement.”

Ciero, who is scheduled to graduate with a bachelor’s degree in mechanical engineering on April 30, said, “I couldn’t have asked for a better ending to my college experience.”

Like titlists in other team sports, these Raider bowlers will get championship rings.

“They were fitted for them before we left Davenport,” Fleck said.

The rings will feature a green jewel with diamonds and the Raiders logo on the side. The Club National Bowling Program covers the cost.

“For each of the guys to have something individually means something,” Fleck said.