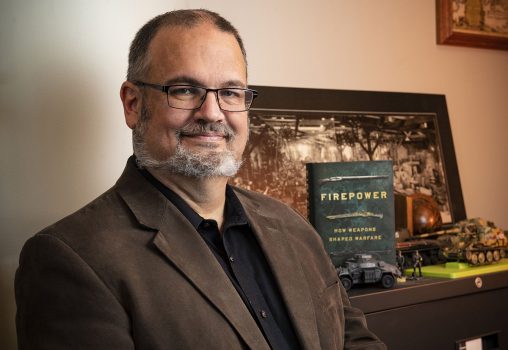 A classroom lecture by Paul Lockhart, professor of history, on The History of the Gun will be featured on “Lectures in History” on C-SPAN.

C-SPAN’s “Lectures in History” will visit Wright State University on Thursday, Feb. 9, to record Paul Lockhart, Ph.D., professor of history, as he teaches his class The History of the Gun.

The lecture will be recorded in 109 Oelman Hall from 9:30 to 10:50 a.m. The public is invited to attend and seating will be available on a first-come-first-served basis.

Lockhart’s book “Firepower: How Weapons Shaped Warfare” was featured on C-SPAN’s “Book TV” in 2021. “Book TV” is a weekly program on CSPAN-2 that has featured authors of merit such as Maya Angelou and David Mamet since 1998.

Lockhart has been a member of the history faculty at Wright State since 1989, after receiving his Ph.D. in military history and early modern European history from Purdue University.

At Wright State, he has served as Senior Fellow in CELIA (Collaborative Education, Leadership and Innovation in the Arts), putting together a community-wide commemoration of the centenary of the First World War. He also founded the undergraduate and graduate programs in the history of war and society.

His appreciation for history, especially the history of firearms, was inspired by his paternal grandmother, who worked for several firearms manufacturers in New England around the turn of the 20th century.

“She was my connection to history. When I was younger, both my parents worked and she spent a lot of time at our house,” Lockhart said. “She was ill and frail, but she remembered a lot of things, like meeting President Taft and seeing veterans come home from the Spanish-American War. She had also been an inspector at Remington. So, I knew I had a grandmother who test-fired machine guns. She was pretty much the coolest grandmother ever.”

In addition to “Firepower,” Lockhart has authored seven books, including “Frederik II and the Protestant Cause: Denmark’s Role in the Wars of Religion,” “Denmark, 1513-1660: The Rise and Decline of a Renaissance Monarchy” and “The Drillmaster of Valley Forge: The Baron de Steuben and the Making of the American Army.”

Lockhart has held fellowships from the American Council of Learned Societies and the American-Scandinavian Foundation. He has been visiting lecturer at the University of Southern Denmark, Odense, and the National Endowment for the Humanities Visiting Distinguished Professor at SUNY/Potsdam College.

In 2014, he was selected as the Brage Golding Distinguished Professor of Research at Wright State and was named Ohio Distinguished Historian 2020-21 by the Ohio Academy of History.

In 2021, he was elected to membership in Det Kongelige Danske Selskab for Fædrelandets Historie (The Royal Society for Danish History) for significant lifelong contributions to the history of Denmark. The society, which was founded in 1745, is one of the older royally sponsored scholarly societies in Europe. It has foreign members, but Lockhart was elected as a Dane. Memberships are for life and the number of Danish members is fixed at 70.