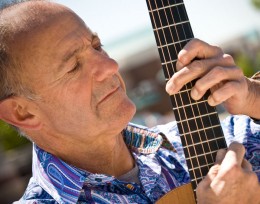 Wright State nursing alumnus Alan Dine is a clinical researcher with a passion for music.

((The following article appeared in the Spring 2012 issue of the The Nurse Advocate.))

Clinical research struck a chord for Alan Dine in high school. And over the years, the Wright State College of Nursing and Health graduate has conducted important research in cardiac function, wound healing, and pain management.

But there are also other chords in Dine’s life—those of the guitar.

“I keep guitars in my office and throughout the house and randomly pick one up and play during the day,” Dine said. “When I travel, which is just about every week, I take along a very nifty guitar that packs into a backpack. Travel is difficult, but having music with me makes it so much easier.”

Dine had been playing the violin while attending Walnut Hills High School in Cincinnati in the mid-1960s. But he traded it for the guitar.

“Playing football gave me the incentive to give up violin and begin to play guitar,” he said. “It didn’t look quite right showing up for practice with a violin. My admiration for the sound of the guitar was born.”

Dine’s interest in the guitar intensified about five years ago following a weekend at the Fur Peace Ranch studying with Muddy Waters’ guitarist Bob Margolin.

The southeast Ohio ranch—owned by Jorma Kaukonen of Jefferson Airplane and Hot Tuna fame, and his wife, Vanessa—is an instructional camp where guests immerse themselves in music to improve their performance and renew their inspiration.
Dine goes to the ranch a few weekends each year and has studied intensively with Kaukonen, Roy Book Binder, Larry Campbell, Pete Huttlinger, and a number of other giants in the guitar world.

For Dine, the ranch is an oasis, an escape from the high-pressure, high-profile universe of clinical research and big business.

He has worked for Pfizer, Procter & Gamble, I-Flow, and now Kimberly-Clark, traveling the world in support of the company’s ON-Q post-op pain relief system. 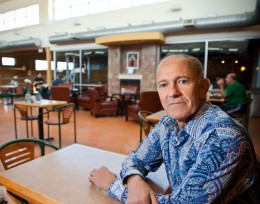 Dine became interested in clinical research in high school AP biology while working with rats and then writing a paper for a science journal. The research project, done for Procter & Gamble, involved Dine studying the impact of a high-sugar diet on rats and the effectiveness of various toothpaste formulas in preventing tooth decay in the rodents.

“I had to brush the teeth of 40 rats twice a day for eight weeks,” he recalled.

Dine says research is so important because it drives progress in science.

“It is really great fun to design a project based on an unknown,” he said. “And when you get to the point of analysis, the tension and excitement grows. That is what keeps me going. Plus, I get to be creative in my role and develop methodologies to find answers to questions that may not have been asked before.”

After high school, Dine decided to stay in his hometown and attend the University of Cincinnati, which gave him full tuition for academics. It enabled him to help his parents with expenses by plowing money he made managing a swim club over the summers back into the household.

During Dine’s senior year, his mother died. To keep busy, he worked a number of jobs, including working as an orderly in the intensive care unit at Drake Hospital. That job and an ICU nurse who encouraged him inspired Dine to pursue nursing as a career.
“There was something about caring for people who could not care for themselves,” he said.

Dine was attracted by Wright State’s nursing program, which was designed to enable students to graduate in three years. He was among three males in the nursing program at the time.

“I was interested in the clinical side of the profession and attracted to that mentally. I did not pay much attention to the gender thing,” he said. “It isn’t a male/female thing really; it is using the gifts and talent you have to build a career that is enriching and satisfying.”  Dine called his education at Wright State “great.” But he said it is how one uses the education to build one’s life that is important.

“My nursing degree has opened up a lot of doors for me, and there are so many doors that this degree can open up,” he said. “But once you step through the threshold, it is up to you to determine the direction you take.”

Dine started donating to Wright State’s nursing program a little each year and then increased the amounts as his income increased. Most recently, he made a $2,000 donation and secured a corporate match from his company.

Dine said the real incentive now is knowing that whatever he gives can help students enter the nursing field.

“I have chosen to support the nursing program not only for the foundation it gave me, but the fact that today when I go to hire people to work in clinical research, my first choices are nurses,” he said. “That choice has helped me to be successful, and in turn I hope has made them successful too.”