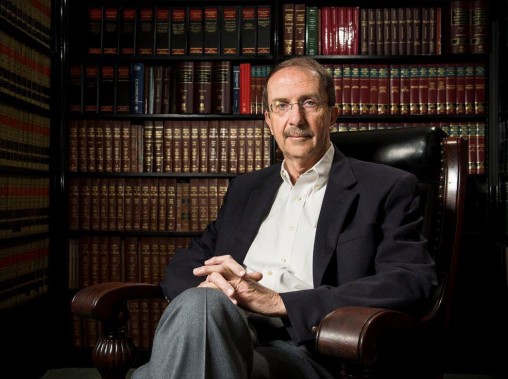 Stationed in San Francisco during the Vietnam War, Army officer Garrett Gall was tasked with escorting the bodies of soldiers killed in the war back to their families.

During that agonizing duty, Gall once had to return the remains of a couple’s only son. To Gall’s surprise, the soldier’s mother asked him to stay with the couple while they navigated their grief.

“I remember the first night sitting and she wanted to take me through her son’s life in Vietnam,” Gall recalled. “I was so impressed by somebody who in their moment of probably greatest pain was able to reach out and say come stay with us.”

It was a lesson in kindness and understanding that would stick with Gall over the years as he finished his military duty, got college degrees from Wright State University and the University of Toledo and built successful careers as an attorney and prosecutor.

And it was a lesson that would give Gall insight into the human condition and an openmindedness and understanding view as he prosecuted cases.

“What I learned is that so much of crime is really unplanned; it’s very spontaneous,” Gall said. “Most people are not inherently cruel or evil. They are people who are perhaps in self-made difficult circumstances and they react to things.”

The 69-year-old Gall is currently reacting to his own retirement. After a 30-year career with the Auglaize and Greene County prosecutor’s offices, Gall is spending a lot of time with his bicycle. He cycled about 2,800 miles last year and plans to cycle 2,500 miles this year.

“I think I’m a sheltered hyperactive person,” he said. “I don’t sit still well, even in retirement.”

“Donating a kidney doesn’t change your life,” he said. “I do more now than I did then.”

Part of his retirement activity is acknowledging the skills and the direction Wright State gave him and the recognition that college today is much more of a financial challenge than it was for him.

As a result, he and his wife, Kathleen — who got her master’s degree in education from Wright State — have funded a scholarship for Wright State students who major in theatre or dance.

“We really enjoy the theatre,” he said. “But even more than enjoying the theatre, we really appreciate seeing the work and talent that goes into that.”

Gall has also created a fund for an annual merit award to Wright State’s outstanding Model UN delegate. In addition, he has been a valued member of the College of Liberal Arts Dean’s Leadership Board and contributed to leadership and study-abroad scholarships.

Gall grew up in the Dayton View neighborhood and graduated from Chaminade High School before enrolling at the University of Dayton, where he studied psychology for two years before enlisting in the U.S. Army.

He was commissioned as an officer in 1967, pulled duty in San Francisco and then spent two years in Vietnam working as a transportation officer.

“I learned a lot about myself, my abilities, my shortcomings,” he said. “It helped me grow. I came out a different person than I went in.”

Gall got a job at Reynolds and Reynolds as a computer operator and programmer, realized he was not built to sit at a desk, so he enrolled at Wright State as a full-time student.

“It was a very energetic place,” he recalled. “Many of the professors were young. There was just a vitality to all of it, and I got caught up in that.”

“The enthusiasm I remember from some of the instructors was transferred to me,” he said. “I was taking things on. I was a worker. I was motivated.”

Gall graduated with honors in political science in 1973, got his law degree from the University of Toledo in 1976 and landed a job with a law firm in St. Marys, Ohio.

In 1986, his wife woke up on a Sunday morning with severe abdominal pain. She was diagnosed with liver cancer and passed away five months later, leaving Gall to raise the couple’s three children, the youngest of which was less than a year old.

So Gall joined the Auglaize County Prosecutor’s Office as an assistant prosecutor, giving him a more regular work schedule. In 1994, he was elected prosecutor.

“It’s like going from playing defense to playing offense; there is a somewhat different skill set,” he said. “But having been a defense attorney made me a better prosecutor.”

In 1997, Gall remarried, moved to Dayton and was hired by the Greene County Prosecutor’s Office as an assistant prosecutor. He retired in 2013.

“It’s been interesting,” he said. “I’ve gone down roads I never expected to go down, but I look back and don’t think I regret anything. So much of life is not the product of great planning, but is the product of moments that change your life.”