As it stands right now, Wright State University’s theatre, dance and motion pictures students have it all to themselves — courses on costuming and a costume shop filled with colorful fabrics and racks of clothing that can time-machine the wearers to Shakespeare’s England or the Roaring Twenties.

But that may soon change.

“We’re interested in opening our costume design, costume construction, pattern drafting and draping, and costume history courses to the entire university,” she said. “We’re looking forward to letting students pursue their passion and find out what they thought might have been a hobby can actually be a lifestyle and a career choice.”

She said many students might have hidden talents that have simply gone undeveloped.

“They may have muscles they haven’t exercised that they want to,” she said. 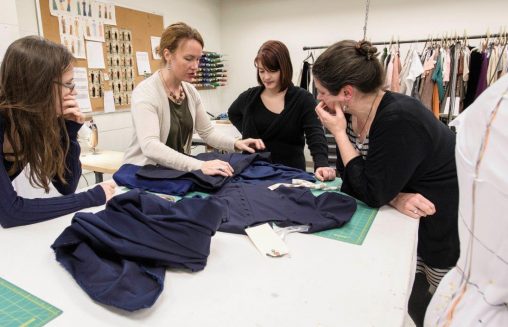 Bourgeois said costuming can lead to jobs to the fashion, theater, film, television and video industries.

“Within theater and film alone, there is a huge industry of costumers across the country and internationally — ballet, opera, dance companies, theater companies,” she said. “They employ costumers, designers, people who are building the clothes, the people who are doing the wigs, the hair, the makeup. The film industry is even bigger. …If you’re watching ‘Saturday Night Live,’ there is an army of costumers back there — people doing the hair, doing the wigs.”

The Wright State costume shop, which is in the basement of the Creative Arts Center, is populated with industrial sewing machines and irons, cutting tables and mannequin-like dress forms.

Cones of colorful thread hang on the walls. Tape measures and pounce wheels sprawl on the tabletops. Boxes bulge with belts, hats, bow ties, zippers and suspender clips. In the fitting room, there are eyeglasses and ring sizers. On the floor is a row of green-and-white saddle shoes that look like they’ve just been kicked off at a sock hop.

A steady “snip, snip, snip” of scissors can be heard as the students cut fabric.

“We burn through scissors,” said Bourgeois.

The costume shop supports Wright State’s Theatre and Dance programs. During plays and performances, the room is used to maintain and launder costumes.

Bourgeois said costumers need to have an eye for colors and textures as well as be problem-solvers and good storytellers.

“You have to be interested and understand how people work and what they want,” she said. “There is psychology. There is a lot of history and anthropology because you’re telling stories from different places.”

“I grew up understanding and looking at how people used what they wore to express themselves — what a power suit does, what uniforms are, how they work and how they communicate ideas,” she said. 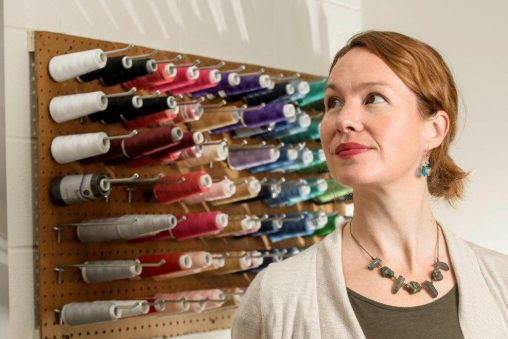 Bourgeois was raised in Ishpeming, a remote city in the Upper Peninsula of Michigan near the shores of Lake Superior. The name Ishpeming comes from the Ojibwe Indians and means “heaven.”

“It’s more Scandinavian or Finnish than American,” said Bourgeois. “It is a beautiful landscape, beautiful water. I think it formed a love of color and movement. I learned to watch the things around me.”

As a teenager, Bourgeois initially wanted to be an architect and then a film designer, designing backgrounds and landscapes. But then she had an “aha” moment as a college student when she discovered the costume shop at Western Michigan University.

“I really understood it, like the way the fabric worked,” she recalled. “Clothing in general is very much about psychology, personality. In costuming, you’re designing characters and telling stories in clothing when you’re working on a film or a movie. When you work in fashion, it’s actually more brilliant because you’re designing the story of the person on the street, what they want themselves to be.”

Bourgeois graduated from Western Michigan with a bachelor’s degree in performance and design and then received a full scholarship to New York University, where she obtain a master’s of fine arts in design with a focus on theater and film. After graduation, she worked at Juilliard School, designing films, videos and operas.

Bourgeois was living in Brooklyn during the 9/11 terrorist attacks and remembers standing in the street and watching the Twin Towers collapse. It was a life-changing moment that led to her re-evaluating her career, which was going very well in New York City.

“I understood art as being important and meaningful and design and what I did within it part of storytelling and creating messages,” she said. “But it reminded me that I needed to be doing this work in bodies of people who don’t have exposure to it. There are communities that need people to teach expression and creativity.”

So she left New York in 2003 and took a job at the University of Michigan-Flint, teaching design and doing outreach theater work.

“I found purpose there,” she said.

“I taught engineers about theater and film design, giving them this creative outlet,” she said.

Bourgeois then moved to Columbus, Ohio, where she started Team Chipmunk, a fashion company that produces an environmentally friendly children’s line and has since expanded into hotel uniforms, ready-to-wear apparel and other things. 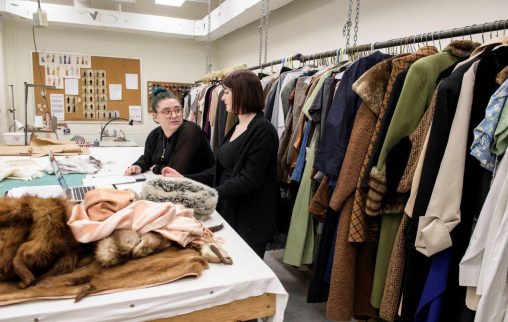 Students who study costuming have landed jobs in the fashion, theater, film, television and video industries.

Then she caught the teaching bug and joined the faculty at Wright State last August.

“The facilities are lovely,” she said. “We have a workshop here. We have a laboratory. We can really do something with this.”

“They’re scrappy. They’re tough. They’re driven. They work hard. They want to be here,” she said.

She looks forward to expanding the program and sharing her passion with Wright State students campuswide.

“Clothes are a really big deal,” said Bourgeois. “There is a lot of power in them.”