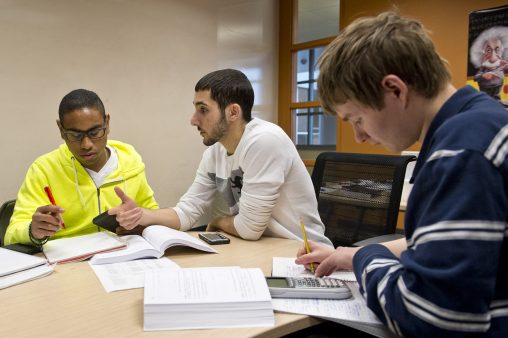 Under a pilot project, Wright State negotiates lower prices for textbooks and online access content on behalf of its students.

A pilot project at Wright State University called Inclusive Courseware designed to dramatically reduce the cost of textbooks and online access content for students has saved them nearly double than what was originally estimated.

In the nine courses, 24 sections and 1,029 students who participated in the project during spring semester, students saved more than $102,400, for an average savings of 48 percent.

This fall, the program will continue with an expanded pilot involving 40 courses impacting 120 sections and up to 6,105 students with a savings estimate of $651,000 based on anticipated enrollment numbers.

This past spring semester, Wright State also formally adopted an “auto-adopt policy” that allows the Wright State Bookstore to assume faculty members will use the same book as the last time they taught a class if they have not turned in their textbook adoption by the due date. Criteria for using the same book includes same instructor and the same book used the past two years. The bookstore sends a communication to the instructor two weeks prior to doing the auto-adopt.

This policy will be used for the first time on a limited scale for the fall semester, resulting in savings to students by enabling the bookstore to start sourcing used rentals from a variety of sources, including the Wright State campus.

“We want to keep our used-book inventory on our campus and we must have the adoption in order to do so,” said Jennifer Gebhart, manager of the bookstore.

Wright State’s Inclusive Access pilot project enables the university in partnership with its bookstore operator, Barnes & Noble, to provide negotiated prices of textbooks and online access content on behalf of its students by using their collective buying power and national agreements with several of the largest publishers, including Pearson, Cengage and McGraw Hill.

“We are definitely leading the way among Ohio’s colleges and universities on textbook affordability,” said professor Dan Krane, chair of the Ohio Faculty Council and chair of the Wright State Task Force on Affordability and Efficiency.

State Rep. Rick Perales, chair of the Ohio House Finance Subcommittee on Higher Ed and a member of the Joint Committee on College Affordability, said that with the rising costs of education nationally, it is more important than ever that students minimize their educational debt prior to starting their professional careers.

“Not a day goes by without a news article commenting on our young workforce defaulting on student loan debts,” said Perales. “WSU has proven that the higher ed community can unite and provide quality educational material at low costs. These young people are the future of our state and nation. We must do what we can to set them up for success.”

Wright State has been collaborating on a study on the cost of textbooks with institutions in the Inter-University Council of Ohio (IUC), an association of Ohio’s public universities.

Each institution will determine the cost of the highest enrollment major in each of eight areas that together will cover more than half of the undergraduate student enrollment. Wright State will work with its campus partner, Barnes & Noble, and OhioLink to obtain costs of new, used, rental and e-books for the selected majors.

An IUC stakeholder summit in late May drew a standing-room-only crowd to hear about the Wright State project from Gebhart and Marcia Stewart, Barnes & Noble regional manager.

“We polled the room and most said they were all just starting down the road looking at Inclusive Access as a possibility for their university and they wanted to know more about how we implemented our program at Wright State,” said Gebhart.

Krane, who has been part of the Wright State team developing the program from the start, says textbook costs have significantly outpaced inflation for the past 15 to 20 years, a trend that studies have shown has adversely affected student performance and the way faculty teach courses.

Students sometimes choose not to buy the textbook and try to muddle through the course without it, putting them at a significant academic disadvantage. Other students may delay buying the textbook, forcing faculty to get the class off to a slower start and reducing the overall effectiveness of classroom instruction.

Students know they are benefiting from the pilot program when they see the description “Inclusive Courseware” on their student bill, which is associated with the course when they register.

If inclusive access was adopted by all of Ohio’s four- and two-year public colleges and universities, Krane says, it would save students at least $300 million a year.

Currently, individual students purchase textbooks through the campus bookstore or elsewhere and pricing is anywhere from “list price” for new textbooks to lower cost options on renting, used and digital choices if available. Savings last year with these lower cost options was over $1.2 million for Wright State students.

Course materials are becoming more interactive, with bundled access to digital components such as videos, homework, quizzes, labs and more. This access is a one-time-use and available new only, so it is an ideal fit for the Inclusive Access program.

Students are charged an Inclusive Courseware fee to cover the cost of the textbooks when they pay tuition, but they can opt out of that fee if they choose to buy textbooks on their own, which is strongly discouraged. The handful of institutions that have used inclusive access typically get textbooks for 50 to 70 percent below list price and much less than even the wholesale prices, Krane says.

The pilot project comes in the wake of a recommendation by the Governor’s Task Force on Affordability and Efficiency in Higher Education that all institutions of higher education in Ohio explore means of reducing the cost of textbooks and report annually on their progress.