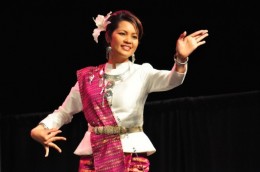 April brings the cherry blossoms to Japan and Asian Heritage Month to America. Wright State University’s Asian/Hispanic/Native American Center is celebrating with a month full of themed events including Asian Culture Night, which will feature a performance by the Confucius Institute of Chinese Opera at Binghamton University.

Yufeng Wang, Ph.D., is an award-winning professor at Sinclair Community College. As a teenager, her love of Chinese traditional art was inspired by renowned artists Sun Qifeng and Fan Zeng in Tianjin. Wang studied Chinese brush painting with the noted artist, Afu Hong from Fujian Province, China. Wang’s artwork reflects and creates a sense of harmony in nature and humanity. She uses the brush with ink and color on paper or silk, creating a rhythmic synchronization of stroke variations and texture expressions to form a “mind image” of the subject.

Dr. Jack Ling, professor of clinical-social psychology and executive director of Institutional Diversity and Inclusion at the University of Dayton, will discuss cultural barriers and how health care workers can deliver culturally responsive services to Asian-American families with mental health needs.

The gendered global expansion of capitalism requires an abundant supply of women’s cheap labor. Dr. Ligaya McGovern, professor of sociology, Indiana University, will discuss the export of Filipino women (as well as other Asian women) to work as domestic workers in the global cities such as Hong Kong, Taipei, Vancouver, Rome, and Chicago.

The Tsunami and the Cherry Blossom Nominated for the 2012 Oscar Documentary Short Films’ Award, The Tsunami and the Cherry Blossom is a documentary filmed in Japan after the devastating tsunami of March 11, 2011. It shares the journey of survivors in the areas hardest hit, who find the courage to revive and rebuild as the cherry blossom season comes to that area, a symbol of hope and new beginnings in Japanese culture.

A collection of photos of Japan: A Year Later… will be on displayed at the event. Co-sponsored by the Asian/Hispanic/Native American Center and the Japanese American Citizens League (JACL) Dayton Chapter.

Owl and the Sparrow

Owl and the Sparrow (Cú và chim se sẻ in Vietnamese) is a 2007 film by Stephane Gauger that follows the fictional story of three Vietnamese individuals who form a unique family as an orphan plays matchmaker to a zookeeper and a beautiful flight attendant.

Battle Hymn of the Tiger Mother by Amy Chua Published by The Penguin Press in January 2011, Battle Hymn of the Tiger Mother was a runaway New York Times bestseller, as well as a bestseller in the U.K., Germany, Israel, Korea, Poland, China, and Taiwan. Chua gives a witty and provocative account about the rewards—and costs—of raising her two children the strict “Chinese” way. The book was the subject of a Time magazine cover story and has been translated into 30 languages. A limited number of books are available for participants committed to the reading discussion. Please contact the Asian/Hispanic/Native American Center at (937) 775-2798 to receive a complimentary copy.

This year’s Asian Culture Night special feature is Amazing China, a Chinese concert showcasing vocal music, instrumental music, dance, and jingju (Chinese opera). Amazing China will be performed by the Confucius Institute of Chinese Opera at Binghamton University, an organization jointly formed by Binghamton University and the National Academy of Chinese Theater Arts, and is sponsored by the Confucius Institute Headquarters in Beijing. The evening also consists of other performances such as ethnic songs, Bhangra dance, Korean drumming, folk and modern dances and an elaborate traditional fashion show.