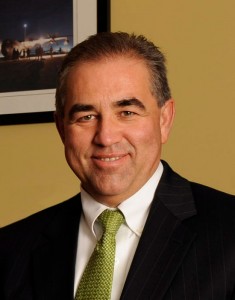 Alumnus Michael Bridges, president of Peerless Technologies Corp., will serve a nine-year term on the Wright State Board of Trustees.

Ohio Gov. John Kasich has appointed Michael Bridges, president of Peerless Technologies Corp. and a Wright State graduate, to the Wright State University Board of Trustees.

The governor announced the appointment June 27. Bridges’ term on the board of trustees is for nine years. He replaces Robert Nevin, who rotated off the board in June after nine years of service.

“Wright State has always been a community focused on building and educating leaders,” Bridges said. “Every student brings their individual talents to their educational experience. I look forward to continuing to encourage and enable those talents and helping to continue to create entrepreneurs and leaders for our region and its future.”

Peerless Technologies is a high-tech, military-focused research and consulting company that in 12 short years has steadily swelled to more than 200 employees and operations in 10 states.

The company’s headquarters, which sits just outside the fenceline of Wright-Patterson Air Force Base, hums with scientists and engineers working on computer, human-performance and intelligence technologies for the military and other federal clients.

Peerless was among six companies that won a $93 million Air Force contract to provide medical, computer and financial support for the transfer of the U.S. Air Force School of Aerospace Medicine from Texas to Wright-Patterson as part of the Base Realignment and Closure Act.

Bridges grew up in Dayton and began attending Wright State when he was still a senior at Stebbins High School. Before he graduated from Wright State, he put in several stints at Wright-Patterson, working in the Flight Dynamics Lab and at the Air Logistics Command Headquarters. Bridges later moved to the Aeronautical Systems Center, where he worked on the F-16 jet fighter program.

Bridges graduated from Wright State in 1981 in systems engineering, mechanical options. He embarked on a 20-year career in defense contracting, working for firms from San Diego to Washington, D.C., before returning home and then starting his own company in 2000.

Bridges borrowed the name of his father’s company—Peerless Transportation and Storage—then called on his daughter to set up an accounting system and lay other groundwork for the new business. He also enlisted the help of The Entrepreneurs Center, a Dayton technology business incubator that nourishes  startup companies.

Peerless is a family affair. Bridges’ daughter, Andrea Kunk, is the chief financial officer. And his son, David, worked at the company managing its information and communication systems until his recent commissioning in the Air Force as a Cyberspace Operations Officer.

All three are graduates of Wright State University, as is Bridges’ wife, Marcia. And Peerless is filled with employees who call Wright State their alma mater.

The headquarters is stone’s throw from Wright State, which was more than just a center of learning for Bridges. He met his wife-to-be at the school library, where she worked as a summer hire. The two were married a year later and currently live in a country home near Yellow Springs.

Marcia Bridges, who graduated from Wright State in biology in 1983, recently completed her master’s degree in counseling and hopes to use the family’s horses to do equine therapy, in which horses are used to promote emotional growth.

Peerless was three times voted one of the Best Places to Work in the Dayton area; received an Edison Emerging Technology Award from the governor of Ohio; and was the first tenant and graduate of The Entrepreneurs Center, an Ohio Edison Technology Center.

Bridges has served on a board at Aileron and presently is on the board at The Entrepreneurs Center. He is also on a congressional National Security Advisory Committee.

Bridges’ appointment to the Wright State Board of Trustees is effective July 1.