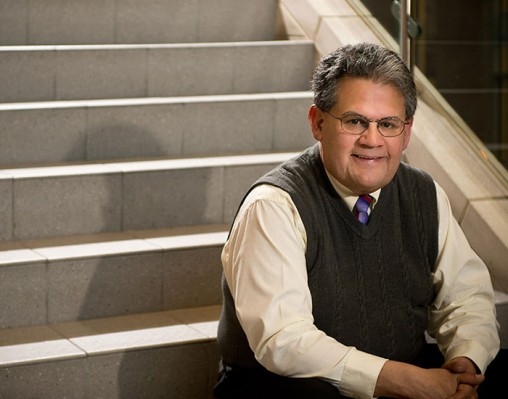 As Wright State’s associate vice president for Latino affairs, Tony Ortiz is building bridges between the university and the area’s growing Latino community.

Today, however, he’s all about building bridges.

According to Ortiz, more than 80 percent of students who have received scholarships from the Dream Team initiatives have used them to attend Wright State.

“Building that bridge to Wright State was one of the things I had hoped to achieve,” Ortiz said.

The university embraced the opportunity to build even more bridges by naming the 58-year-old Lorain native to his current post in October 2013.

Ortiz’s community activism began long before his current job, however. Wright State student Kathryn Brown, who volunteers as a mentor for Latino teens, referred to Ortiz as “almost like the president of the Latino community.”

One of his most visible initiatives has been El Puente Learning Center, a program staffed, in large part, by Wright State students. El Puente serves children from Latino families in grades K–6.

Those who have worked with Ortiz say he sets a good example of service mentality for those students.

“Tony has lived the Latino experience in Ohio,” said Rosa Caskey, volunteer coordinator for El Puente. “Wright State is young as an institution and is beginning to open doors to those who rarely dreamed that higher education was a possibility. To have Tony Ortiz in that position can only make Wright State the ‘Right Choice.’”

Ohio Gov. John Kasich named Ortiz to the Ohio Commission on Hispanic/Latino Affairs in 2012 after meeting with Ortiz and other “Dream Team” members in 2011. Ohio Magazine named Ortiz one of its Excellence in Education honorees.

He moved to Dayton in 1980, joined the Wright State staff as head athletic trainer in 1985 and transitioned to full-time faculty member in 2008. During his time as director of the athletic training academic program, enrollment grew from six students to 80 and recent graduates enjoyed 100 percent job placement.

“Building that program was very rewarding, but I put in a lot of 80-hour weeks to get there,” Ortiz said.

In 2008, Ortiz approached Robert Sweeney, executive vice president for planning and secretary to the Board of Trustees, with the idea of establishing a more active institutional approach to Latino affairs. Sweeney endorsed the notion, named Ortiz the university’s community liaison, and helped him assemble the “Dream Team.”

University statistics indicate there were 434 Hispanic American students enrolled at Wright State in the fall of 2013. Ortiz would like to expand scholarship, internship and networking opportunities and increase retention for them.

“That’s what we’re all about at Wright State — being inclusive,” Ortiz said. “Some of these programs will help much more than Latinos. If they help bring students to Wright State and give them the opportunity to get a degree, well, mission accomplished.”

Other current projects for Ortiz include potential partnerships in Panama and a dual language degree program.

Of course, Ortiz will remain active in some of his previous ventures that are not directly university related. The Immigrant Leadership Institute, for example, offers resources to many other people groups, most recently, to immigrants from Sudan.

Ortiz said he believes he has been given an opportunity to “pay it forward.” A family friend named Saul Torres helped encourage Ortiz to pursue a college degree, first at Lorain County Community College, then at Bowling Green State University.

“This is the first time in 35 years I’m not teaching, and I do miss the kids,” Ortiz said. “But this is something I’ve been wanting to do for a long time.”