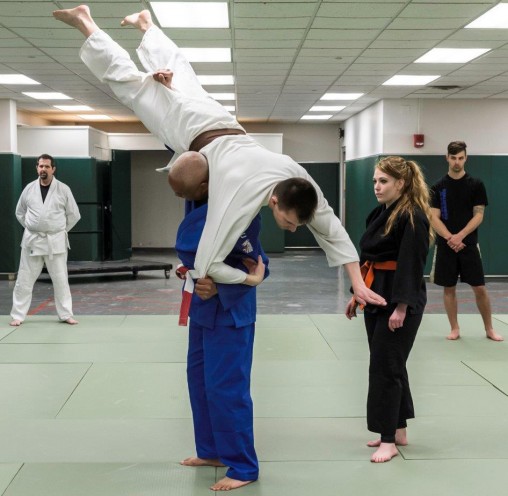 It’s pretty easy to find the class once you walk into the Wright State Nutter Center. You just follow the sound of bodies being hurled to the mat.

And once you arrive at the Raider Active judo class, it’s all business. Students perform a ritsu rei — or standing bow — each time they enter as a way to clear their minds. And when they work out, their faces are painted with focus and determination.

“It puts you in peak condition, and it builds confidence like nothing else,” said Andrew Carper, a communication studies major. “And it’s just fun. It’s a blast.”

The class is taught by Mark Curry, 54, a sixth-degree black belt who has been practicing judo for 48 years. He was national judo champion several times and Ohio state champion a record 18 times. He has also been an Olympics alternate and was co-captain of the United States Judo Team that toured South Africa in 1981, going 32-0 against South Africa and other foreign teams.

“The enjoyment, thrill for me is to be able to impart what I was given to these students and see them progress,” said Curry, a sensei, or teacher.

His teaching skill is evident.

Three of his students recently returned victorious from the Ohio judo championships in Bluffton. Carper and Shaun Gunter took third and second places respectively in their weight classes while fighting in the black belt division, above their belt level. Nicole Henson took second place in her weight class in the white-to-green-belt division. 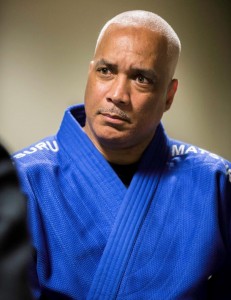 Mark Curry has been national and Ohio state judo champion, an Olympics alternate and co-captain of the United States Judo Team.

“I feel very fortunate to have been introduced to judo,” said Curry, owner and head instructor at the Dayton Martial Arts Center in Trotwood. “I feel even more fortunate to have the opportunity I have here at Wright State to have an effect on the student body.”

Judo, which means “gentle way,” is a martial art, combat technique and Olympic sport created in Japan in 1882 by Jigoro Kano. The goal is to throw opponents or subdue them with holds or by pinning them to the ground. The philosophy of judo became the model for other modern Japanese martial arts.

Curry began taking judo lessons at age 6, following in the footsteps of his two older brothers. He won his first trophy in 1968 at a judo tournament at Wright-Patterson Air Force Base, taking second place.

Curry says judo can help young children who lack focus and give older people of feeling of harmony.

“And judo is great for weight reduction, great for hypertension, can even stave off diabetes and is a super way of managing arthritis,” he said.

Curry has worked as director of operations for a defense contractor in support of military operations in Iraq and Afghanistan and currently works as a project manager for a construction company. He had hip-replacement surgery in December, but was back on the judo mat in three weeks.

“I would tell the students here that no matter what your physical shape is, your stature, none of those things matter,” he said. “The art is founded on leverage, not strength.” 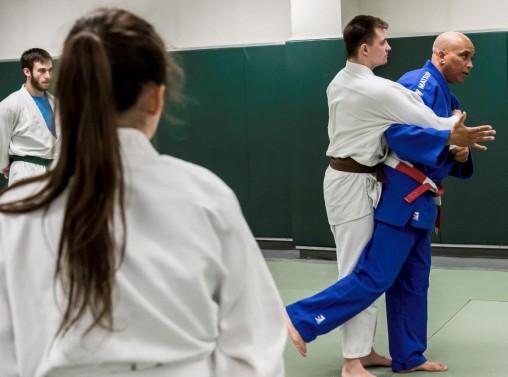 The judo class, held twice a week in the Wright State Nutter Center, is offered by Raider Active in the Department of Kinesiology and Health.

Gunter, an international studies major from Troy, said judo has given him focus, boosted his self-image and shown him how concentrating on something yields results.

“I’m not athletic at all and was a very uncoordinated person, so I was literally starting from scratch,” he said. “What it comes down to is: ‘If I can do this, I can do anything.’”

Curry said judo can give young women the tools to defend themselves against stronger male aggressors, calling it “the equalizer.”

Henson, a Spanish major from Covington, Ohio, started taking the class a little over a year ago. She says it has built her confidence.

“Judo is a different way to think,” she said. “They teach us how to yield to people as opposed to being aggressive or hot-headed. The whole point is to use a person against themselves.”

The judo class is offered on Tuesdays and Thursdays from 3:30 to 4:30 p.m. It is one of many offered by Raider Active through the Department of Kinesiology and Health.