It was just a photograph.

It was just one of thousands of photographs that Gino Pasi processes in his job as archivist and collections manager at Wright State University’s Special Collections and Archives in the Dunbar Library. But this photograph — that of a beautiful young woman taken in the 1940s — was special.

And for Pasi — a filmmaker whose creative juices are always flowing — it was a movie. So he turned it into one.

Pasi has written, directed and produced “The Archivist,” a short film about a young curator whose obsession with a photo leads him to the woman who was photographed and changes both of their lives in the process.

Pasi started the moviemaking process in the summer of 2014. After writing the script, he had to line up a film crew. With a modest budget of $3,000, the film was shot in four days in Dayton and Cincinnati.

Pasi is currently getting some original music from a local band to finish up the soundtrack. A movie trailer is expected to be ready by the end of March.

The plot involves a young archivist who, after finding the woman’s photo, tracks her down at an art gallery in New York City. She is a widow in her late 60s lamenting the passing of her youth. He is a historian who thinks about the past more than the present or future. The two have dinner together.

“They each love the past and are kind of stuck in the past,” Pasi said. “Over the course of this evening, they take a step forward and engage in the present.” 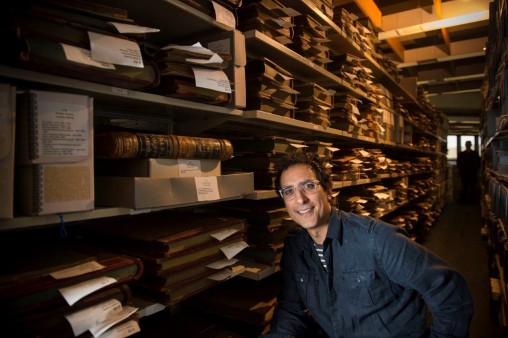 An image from Special Collections and Archives inspired Wright State archivist Gino Pasi to make a movie. (Photo by Will Jones)

Some of the scenes were shot in Wright State’s Dunbar Library and other campus locations. There are also scenes at the Dayton Visual Arts Center, the Color of Energy Gallery, Dorothy Lane Market and Salar, a restaurant in Dayton’s Oregon District.

It is the second film Pasi has produced, written and directed. The first was one called “An Unusual Likeness.”

Pasi grew up in the small western Pennsylvania town of Brockway, home to a glass factory and surrounded by steel mills. His father was a truck driver, and his mother worked in a bakery.

Pasi remembers getting hooked on movies at a young age.

“My father and I would watch these Biblical epics, like ‘The Robe’ or ‘Barabbas.’ The next day I would be dressing up in a toga and trying to recite monologues from the film,” he said. “Then it became a thing. It was always a part of my makeup.”

Pasi finally worked up enough nerve to go on stage, taking a small part in a play his senior year at Brockway Area High School.

“I think I had seven lines; I botched them,” he said.

After high school, Pasi began doing stand-up comedy in the Pittsburgh area. Then in 1990, the 19-year-old left for New York City and went to an acting conservatory, the American Academy for Dramatic Arts.

He later attended Messiah College in eastern Pennsylvania, getting his bachelor’s degree in history. But he still had the theater bug, so he worked for Kent State University’s professional summer theater and then moved back to New York City, where for the next few years he performed in several plays and touring productions.

But history was beckoning Pasi as a career.

So he got his master’s degree in American studies from Penn State University and landed a job with Pennsylvania’s state historical organization.

Then in 2007, he was hired by Wright State to do oral histories for the Dunbar Library on Cold War aerospace engineers who had worked at Wright-Patterson Air Force Base. He later became an archivist/collections manager.

Pasi’s primary duty is to make contact with potential collection donors and evaluate their papers, photos, diaries and other materials for possible inclusion in the library’s Special Collections and Archives.

“I like going to people’s basements or their attics or their businesses and talking with people who may not think what they have is valuable,” he said. “But I often tell them we are interested in this stuff and that it will be historically significant, if not now, 50 years from now.”

One day, Pasi found a package on his desk mailed from a suburb outside of Boston. It was from a man who told him that a nanny who had taken care of his family for years had recently died and left diaries, letters, photos and news clippings from her brother. The brother was Raoul Lufbery, a French-American fighter pilot and flying ace in World War I with 17 combat victories.

“We’ve got a world-class aviation history archive,” said Pasi. “There is not a day that goes by that something fascinating doesn’t cross your desk — something from the Wright brothers to Charles F. Kettering. Every day you’re holding something in your hand that not a lot of people get to see on a regular basis.”

Pasi said working in the archives, which is headed by Dawne Dewey and has more than 700 collections of historical documents and artifacts, inspired him to make the movie.

“There are thousands of stories in these collections,” he said. “You can read diaries, and the ideas begin to marinate, start clicking. It’s just a very inspiring place creatively to work.”

Pasi acknowledges that “The Archivist” will not appeal to everyone.

“There is no zombie apocalypse, there is no car chase, there is no shootout,” he said. “It’s a small, short film about two people who find it hard to move on with their lives. Though not for everyone, I think its appeal will be broad because I think there are issues that are collective to all of us.”

Learn more about “The Archivist” on the film’s Facebook page.