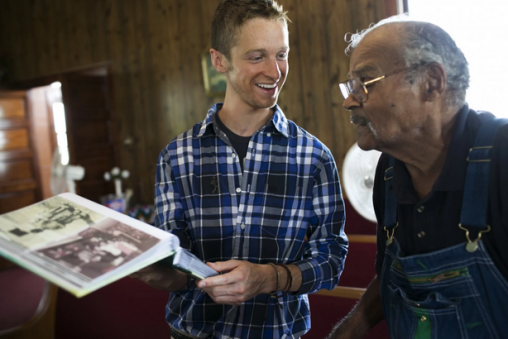 Connor Kaiser, at left, is a junior at Wright State University majoring in International Studies.

Amid the corn and soybean fields of western Ohio lies a progressive crossroads where black and white isn’t black and white, where the concept of race has been turned upside down, where interracial marriages have been the norm for nearly two centuries. The heavy boots of Jim Crow have never walked here.

Founded by James Clemens, a freed slave from Virginia who became a prosperous farmer, Longtown was a community far ahead of its time, a bold experiment in integration.

Now that history is in danger of being lost. Longtime Longtown residents are dying, and whites are moving in and buying property. Many historically black-owned buildings have already been torn down or remodeled.

“We were a typical Longtown family. We all looked different, and we were taught that color didn’t matter,” Keiser said. “As long as I have anything to do with it, Longtown won’t die.”

A junior majoring in international studies at nearby Wright State University, Keiser seems an unlikely savior for this blink of a town. Unfailingly polite, possessing a bright white smile, Keiser looks as Caucasian as the rest of Darke County, which was 97.7 percent white at the last census.