Turning a setback into a comeback

Most NCAA Division I student-athletes love their sport. Few are as dedicated to it as Wright State pitcher Katie Neary. Even fewer have been asked to demonstrate their dedication by crawling out to the field of play.

“My mom would push me into the indoor (practice) facility in a wheelchair,” Neary recalled. “I would crawl out to the mound and try to pitch. The most pitches I got in during one workout was five. Then I fell over and they carried me out.”

“I wish people could have seen her courage during our workouts … how I would have to help her crawl out of the cage,” said Gina Mascaro, Neary’s former pitching coach. “She is truly an inspiration to me and one of my greatest rewards as a coach.” 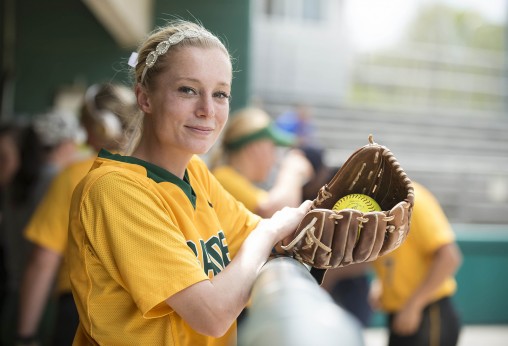 Pitcher Katie Neary overcame a severe injury that left her unable to walk to join the Wright State softball team. (Photos by Will Jones)

Just over a year ago, Neary was too weak to walk to the pitcher’s circle, too ravaged by a rare nervous system disorder to throw more than a half-dozen pitches. Today she is a redshirt freshman on the Raiders roster, regaining her strength and making strides every day toward returning to the sport she loves.

“Katie will be ready to make an impact next year,” said Debbie Neary, Katie’s mother. “I am excited for her. It’s always been her dream. And the fact she did it under the circumstances she’s had to go through — it’s amazing.”

Neary’s amazing journey through a battle with complex regional pain syndrome began with a piece of flying fruit.

She had committed to Wright State in January of her junior year of high school despite having first visited campus during the middle of a winter storm. Neary returned home to Cypress, California, with a newly purchased pair of snow boots and a scholarship offer — which she accepted five days later.

“Katie was a hard-throwing right-hander, a power pitcher and a real competitor,” Wright State head softball coach Lynn Curylo said. “She was fearless on the mound against a bunch of players signed to Power 5 schools.”

A few weeks later, a food fight broke out at the Los Alamitos High School cafeteria. A player on the school’s baseball team picked up an orange and threw it at Neary from close range, striking her in the back of the neck.

Doctors initially diagnosed Neary with a concussion. But, as time progressed, the problems increased. Spells of fainting and nausea were followed by an operation to remove her gall bladder.

Curylo received a text with words to the effect of “Hey, coach, I’ve just had my gall bladder removed. No big deal.”

But this was a very big deal.

Neary’s health continued to deteriorate after the operation. Pain in her legs limited her ability to walk. The pain in her stomach made eating a chore. Consultations with several physicians and other experts yielded few answers. Spinal injections, weight loss and more medications followed. Neary would sleep most of the day. 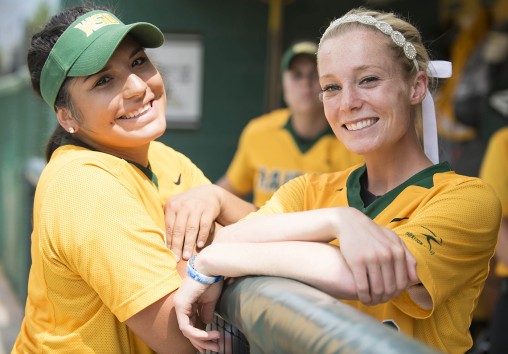 Katie Neary redshirted her first year on the softball team to focus on rehabbing and being a great teammate to players like catcher Vivi Marquez.

Curylo knew her recruit was having some health issues, but Neary never communicated their severity. When Curylo talked to Mascaro, the pitching coach in California, however, she heard a different story.

“(Mascaro) told me, ‘Wow, this kid is really going through some stuff right now,’” Curylo said.

According to the Mayo Clinic website, complex regional pain syndrome is a rare form of chronic pain that may develop after an injury. Symptoms include continuous burning or throbbing pain and hypersensitivity.

Neary said a cotton ball dragging across her leg felt like a knife was cutting her open. Putting on clothes was even more painful, leaving behind cold purple skin with red hot spots and blisters. Her hair began to fall out. Stomach problems led to her losing 30 pounds. At one point, her kidneys began to shut down.

“Her nervous system was completely out of whack,” Debbie Neary said, “and this was happening to a kid who had always been 100 percent healthy.”

Physicians in California recommended in January 2015 that Katie Neary enroll in a pain management program at the Mayo Clinic. The complex regional pain syndrome might never be cured, they said, but it could be managed.

More bad news awaited Neary in Rochester, Minnesota. She was too weak and had lost too much weight to begin the program. The doctors wanted her to eat. Neary wanted nothing to do with food. She was miserable. Neary phoned her father, Mike, several times and begged him to order Debbie to bring their daughter home.

“Dad said, ‘The doctors don’t believe you can do it,’” Katie Neary said.

The two adjectives used most often to describe Neary by those who know her well are “stubborn” and “competitive.” That challenge, from (supposedly) disbelieving doctors, was all she needed.

“That next meal I was like, ‘Give me every single thing you have in this kitchen,’” Neary said. “I was so mad. I was like ‘I’ll show you, doctor.’”

Two weeks later, Neary was strong enough to return home for her senior prom and was allowed to pitch in one last high school game. She faced one batter — and struck her out.

Then it was back to Minnesota for a month of 12-hour days filled with occupational therapy, physical therapy and learning how to manage her pain.

“I bought into everything they told me to do,” Katie said.

Neary learned how to retrain her brain where pain was concerned. She learned meditation techniques and the proper use of occasional medication. She learned the value of a long run and a hot shower. She learned how to put on layers of warm clothing in cold weather, even if her body seemed to be screaming out against it.

When Neary arrived in Minnesota, she had to be pushed through the airport in a wheelchair. The day before she left, she went on a three-mile run.

Debbie Neary, worried that her daughter might need continued care, had secretly applied to several California universities on her daughter’s behalf. Katie had other plans.

“I didn’t care if I was 95 pounds and deathly ill, I was going to come to Wright State,” Katie said. 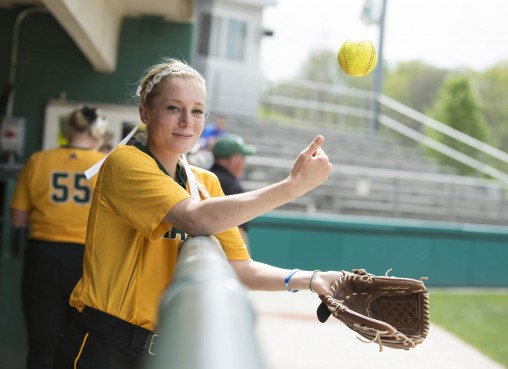 Neary is expect to pitch once again for the Raiders during the 2017 season.

When Neary walked into Curylo’s office last fall, the Wright State coach knew the significance of what she was seeing.

“Here is somebody who has been through hell and back and her No. 1 motivation is to get into that circle and pitch D-1,” Curylo said. “A lot of players would have said ‘Forget about softball.’ Many parents would have said that. My heart told me that I had to stay positive and patient, that I needed to allow the situation to play itself out.”

There were realities to face. Katie had gained some weight back but was still significantly short of her former playing weight. Curylo and the Raiders training staff needed to learn how to discern if Neary was battling her condition or truly injured. Neary also had to face the typical adjustment required of any freshman student-athlete at a university thousands of miles from home.

A redshirt year seemed the most prudent approach, Curylo said, and Neary agreed.

Now she is able to focus on her academics, working toward a communication degree with an eye on fashion marketing. She is getting stronger, gaining weight and pitching to hitters during practice. Neary is also learning to fit in with her teammates, many only vaguely aware of the battle she faced to join them.

“A lot of people who are redshirting miss the fact they are not just getting an education in the classroom, but on the field as well — just from a different vantage point,” Curylo said. “Not Katie. She is finding ways to be a great teammate and make herself matter. She says some of the most profound things during our team meetings.”

When the 2017 season begins, Neary will once again be able to let her pitching do the talking. The fact she is once again able to pitch, a year removed from not being able to walk, says all you need to know about Katie Neary.

“How do you beat that kind of fire?” Curylo said. “I can’t imagine what she will do to hitters. They won’t stand a chance.”