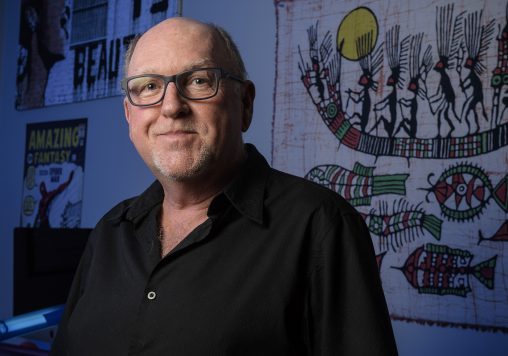 John Haught returned to Honduras, where he spent 10 years of his life, to develop a new curriculum and strategies that focus on communicative language teaching as a Fulbright scholar. (Photo by Erin Pence)

The Central American nation of Honduras is in his blood.

It was in Honduras where Wright State University associate professor John Haught spent 10 years of his life, learned how to scuba dive, operated an underwater photography business and met his future wife.

So it was a bit of déjà vu when Haught was appointed as a visiting Fulbright scholar at the National Autonomous University of Honduras in Tegucigalpa and spent the fall semester in a most familiar land.

Haught is an associate professor of TESOL and applied linguistics in the Department of English Language and Literatures. TESOL stands for Teaching English to Speakers of Other Languages.

Wright State’s TESOL program is more than 30 years old. Those in the program include Chinese, Saudi and other international students — as well as English-speaking American students — who want to teach English. Many graduates teach at high schools and universities. A few are hired by international business executives in the United States as tutors. Others find employment overseas.

Haught said Ohio has become incredibly diverse, with more than 110 different languages being spoken in its public schools.

“We have refugees from all over the world,” he said. “Many of these teachers have English-language learners in their classrooms, but they have no training.”

Many of Haught’s students are education majors who aspire to be teachers and who will teach students who speak English as their second language and are in different stages of language development.

“What we teach is content-based instruction so that science teachers, for example, can learn how to modify their teaching delivery in such a way that these English-language learners can get it — so they can start learning the science concepts without a full command of English,” he said.

Haught also goes into the schools and conducts workshops on content-based for the teachers there.

In Honduras, Haught helped the university there develop a new curriculum and strategies that focus on communicative language teaching — Haught’s specialty in which he uses drama, music, poetry and other creative means to teach English.

The students are assigned to use English to act out social situations such as getting directions, going to the doctor or ordering lunch at a restaurant. They break into small groups, rehearse the dialogue and perform.

He was a featured speaker at the International Congress of Language Teachers held at the university and at an international scholarship fair in the capital. He also worked with teachers at the COMSA International School, an experimental bilingual school in the coffee plantation region of Honduras.

Wright State and the National Autonomous University of Honduras are currently negotiating a memorandum of understanding that would encourage the exchange of students and scholarship and possibly lead to additional collaborations with Latin American schools.

Haught grew up in northeast Ohio, in Wooster and Cuyahoga Falls. His stepfather was a professional musician, and Haught’s boyhood involved playing music, singing and acting.

A first-generation college student, Haught earned his bachelor’s degree in theater from Ohio University in 1979 and embarked for New York City, where he pursued an acting career. He later worked in a traveling children’s theater in Texas.

During this period, he spent time in Mexico and Central America, learning Spanish and taking up scuba diving. In 1988, he landed a job at a diving resort in Honduras teaching underwater photography and videography.

It was there that he met his future wife, and the couple would spend the next 10 years in Honduras. Haught started a underwater photography business, but also became involved with a bilingual school, an interest that would change his career.

Haught understandably has a soft spot in his heart for Honduras.

“It’s an incredibly beautiful country,” he said. “It has so much potential for tourism. So the Hondurans are very, very interested in learning English. They see tourism as being one of the great economic opportunities to help turn the country around.”

Honduras also battles poverty and a high homicide rate, primarily due to drug- and gang-related violence. While he was there, Haught relied on the locals to shield him from any potential violence.

“I had a network of taxi drivers who just really took care of me,” he said.

Haught said the highlight of his time in Honduras were the friends he made with colleagues and students, whom he described as earnest and polite. Many of them would shake his hand and thank him after class.

Saying goodbye, he said, was tough.