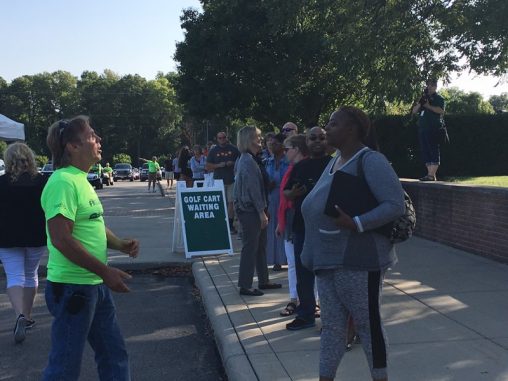 As new Wright State University students moved in for the first time on campus Thursday, they were welcomed by a president who’s just arriving as well.

Cheryl Schrader, who started at Wright State in July, joked that she felt kind of like a freshman on move-in day too.

“I know that Wright State does move in day like no other institution and I’m really happy to be apart of it,” Schrader said. “It’s a special day for me because I’m coming in with the same cohort so we’re all freshmen together.”

Around 1,400 students moved to campus on Thursday, Schrader said, most of them being freshmen. Another 1,000 or so will arrive Saturday, she said.

The university had 110 golf carts zooming around campus and about 500 volunteers, including students staff and faculty, helping people move in to the school’s 29 residence halls and on-campus apartments.

“I’m really excited to be here at move in day. This is one of the best days of the year,” Schrader said. “I’ve been at a number of institutions and I’ve never seen such an organized move.”