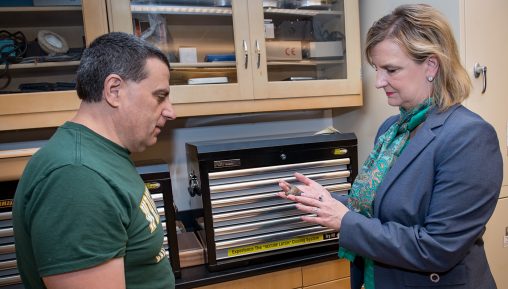 When he was 30 years old, Chuck Ciampaglio was still working as an auto mechanic in Baltimore. It was a far cry from where the Wright State University professor of earth and environmental sciences is today — a doctor of paleontology and one of the world’s leading authorities on sharks.

Ciampaglio has become a darling of the National Geographic, Discovery and Smithsonian channels when they do shows examining the history, characteristics and behavior of sharks.

In July, a film crew from the Smithsonian Channel traveled to Ciampaglio’s Lake Campus lab for a show on the Top 10 ancient predators, one of which is the megalodon, a prehistoric shark regarded as the largest predator in vertebrate history.

Ciampaglio knows a bit about the megalodon, which means “big tooth.” He’s among only a handful of scientists worldwide who has studied the creature.

“It is the largest carnivore that has ever lived,” Ciampaglio said, adding that the shark was as large as a Greyhound bus with a mouth that was eight-feet high and bristling with 300 teeth. “The megalodon is represented by a line of gigantic sharks that winked out about 2 million years ago when their food supply of large marine mammals dwindled during the Ice Age. They’re gone.”

Ciampaglio’s primary research goal is to investigate the evolutionary patterns of present-day sharks, which have survived five massive extinctions over the course of life on Earth.

“It is going to tell us eventually why some things are extinction-proof,” he said. “Sharks are an indicator species for sure. I think they’re really important. They’re majestic animals that have seen the rise and fall of every other group of animals on Earth almost.” 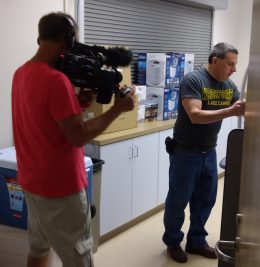 A crew from the Smithsonian Channel filming Chuck Ciampaglio.

In 2009, the National Geographic Channel brought a small replica of a megalodon’s jaw to Ciampaglio’s lab for an episode of “Prehistoric Predators.” Three years later, the Discovery Channel filmed a “Shark Week” episode with Ciampaglio and a full-sized model of megalodon with a pneumatically operated, stainless-steel jaw that he helped create.

Next up, Discovery Canada did a segment on how Ciampaglio researches sharks. And most recently, the Smithsonian Channel approached him for its show, with megalodon being the featured star.

For the Smithsonian show, Ciampaglio and some engineers built a small rig to operate the jaws and made some synthetic, gelatinous material designed to simulate the skin, tendons and blood sacs of marine mammals to demonstrate the biting power of the jaws. He is also working with the channel as technical editor on computer generated imagery designed to “bring megalodon back to life.” The episode is scheduled to air in December or January.

A small ocean of containers containing shark fossils and sediments populates the shelves of Ciampaglio’s lab. He collected the samples — which span 400 million years — from 400 quarries and other locations in the United States, Europe and Asia.

Ciampaglio says sharks are about the oldest vertebrate group that has jaws and their teeth are very revealing.

He pulls out a gleaming, razor-sharp, arrowhead-shaped shark’s tooth that looks like it was still in the animal’s mouth yesterday. Turns out it’s 50 million years old.

“Teeth are absolutely of paramount importance,” he said. “And luckily with sharks, the teeth preserve very well and we get a really good record.”

The largest shark tooth ever found is over 7 inches long, but the tinier teeth give the best insight into the species.

“The small stuff is the coolest because they’re perfect. They could be 300 million years old and look like they were just shed,” he said. “You can see the blood vessels go into the root, which is perfectly preserved. The enamel is still there.” 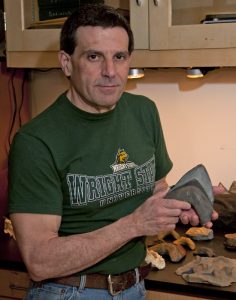 Chuck Ciampaglio holds a tooth from the prehistoric shark megalodon.

Ciampaglio is working on refining acid chemistry techniques to break down solid rock and free the fossilized shark teeth inside. His lab is filled with containers housing different blends of acid.

Sharks have seven rows of teeth, one behind the other. When a tooth is lost, another one wheels into its place. And the teeth are shaped differently, depending on where they are in the jaw. In fact, a shark is one big tooth. Its entire skin, mouth and mucous membranes are covered in denticles, scales that have teeth-like layering.

The spring-like jaws of a shark actually extend from its body when biting and then retract. The bite force of the shark has been estimated at about 45,000 pounds, the strongest of any animal.

Sharks do the most damage by clamping onto their prey with their sharp, tearing teeth and then thrashing, slicing through bones and tendons. But the animals also have crushing and nipping teeth.

Ciampaglio grew up in Baltimore and as a boy would collect fossils and often visit the Smithsonian Institution’s National Museum of Natural History in nearby Washington, D.C. The museum’s collections contain over 126 million specimens of plants, animals, fossils, minerals, rocks and meteorites.

But after graduating high school, Ciampaglio worked as an auto mechanic along with his father and brother.

“I liked the diagnostic part, working on electronics, rebuilding engines,” he said. “I like working with my hands.”

When he turned 30, he decided it was time for college. He earned his bachelor’s degrees in chemistry and physics at Towson University in Maryland in 1997. He received his master’s degree in zoology at Duke University and then began pursuing a Ph.D. in paleobiology and paleontology.

“It was a no-brainer for me because I’ve always been interested in fossils and past life and how we got to where we are today,” he said.

One day, he was collecting fossils at quarries on the coastal plain and discovered a four-inch-long tooth from a prehistoric shark.

“That just cemented it because I always liked sharks anyway. I just couldn’t stop looking at it,” he said.

After graduating from Duke with his Ph.D., in 2002 and doing some postdoctoral work, Ciampaglio joined the faculty at Wright State’s Lake Campus in 2003.

He says the Lake Campus has since dramatically grown its programs and research. A recent graduate of the new Integrated Science Studies degree is currently working for the National Oceanic and Atmospheric Administration, monitoring fish in the Bering Sea off Alaska. And ground was broken in May for an Agriculture and Water Quality Center, which will feature state-of-the-art equipment to do chemistry.

Ciampaglio says his most important findings over the years included reaffirming that sharks were the earliest vertebrates and disproving that megalodon gave rise to the Great White Shark.

Sharks are apex predators — predators at the top of the food chain upon which no other creatures prey. Only humans kill sharks, by overhunting them or helping change their environment through human activities.

“When you take out an apex predator, you break the food chain and you actually lose diversity,” said Ciampaglio. “And when you lose diversity, you can’t get it back sometimes. That’s really, really important. So sharks serve every ecological role you can think of. Removing them for a fin and killing them is a crime in my opinion.”