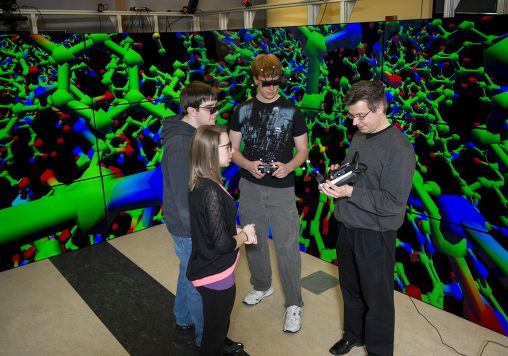 New virtual reality equipment at Wright State will be available to every college on campus to train students.

New state-of-the-art virtual reality equipment that will help teach everything from anatomy to science and engineering will soon be available to Wright State University students thanks to a workforce development award from the state.

The Ohio Department of Education has approved $538,562 in funding that will enable the university to purchase displays that will immerse students in virtual worlds through computer-generated 3D images.

“With this money we’re buying one of those full-scale, walkable displays,” said Thomas Wischgoll, professor of computer science and engineering and director of the Advanced Visual Data Analysis (AViDA) group. “It tracks where you are and recreates your perspective so it feels like you are really going through that world.”

The new technology will expose students and others to a virtual environment where they can see things such as the inner workings of an automobile or the human body without having to disassemble a vehicle or operate on a patient. It will also turn large amounts of data into images to enhance comprehension.

Wischgoll said multiple people can be immersed in the display at the same time, enabling them to interact with each other.

“From an instructional perspective you can use it to explain things to other people,” said Wischgoll, who teaches graphics classes in the Department of Computer Science and Engineering. “Students can see what you see.”

AViDA is dedicated to research and support of the community in scientific and information visualization, medical imaging and virtual environments. The group runs and supports the Appenzeller Visualization Laboratory in the university’s Joshi Research Center. The $2 million Vis Lab opened in 2007, enabling businesses to outsource virtual reality work without having to buy the technology themselves.

The new equipment will be important in training students for jobs following their graduations. Several local companies currently make heavy use of virtual reality.

“(Wright State’s) proposed cyber-enabled interactive and virtual reality training program will give the new generation of workers the requisite experience that (our company) seeks — the experience in remotely specifying the machine control parameters and producing parts,” said Anil Chaudhary, president of Applied Optimization in Fairborn. 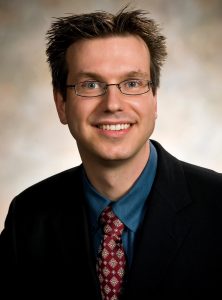 In virtual reality, high-performance computers connected to projectors throw alternating left-eye-right-eye images of a 3D object on a large screen in a way to create depth. Viewers wear specialized light-polarizing glasses that synchronize the images to complete the 3D effect.

In immersive visualization, images can be projected on all four walls, the ceiling and the floor. As viewers move and turn their heads, the images change to create the illusion of walking or floating.

Long a darling of the military, aviation and video game industries, virtual reality is being embraced by more and more businesses. Manufacturers of farm equipment, car seats, mufflers and other products have joined automakers and aircraft manufacturers in using the technology to speed up and improve product design, train workers and configure factories and stores.

The state money is part of the Ohio Department of Higher Education’s Regionally Aligned Priorities in Delivering Skills (RAPIDS) program, whose goal is to provide the most up-to-date education possible to create a skilled workforce for in-demand jobs.

“RAPIDS has brought each region of Ohio together to address their most urgent workforce needs and give traditional and nontraditional students pathways to good-paying jobs in their communities,” said John Carey, Department of Higher Education chancellor.

Some of the virtual reality equipment, for example, will be used to train future welders, saving on the cost of buying actual welding tools and making for safer training.

The new virtual reality equipment at Wright State will be available to every college on campus. Students and faculty from psychology and human factors have already lined up to use the environments available in the Appenzeller Visualization Laboratory for research projects.

While the award has been approved, Wischgoll is waiting for the go-ahead to actually purchase the equipment. Once that happens, it will take several weeks to install it and make it operational.

Wischgoll grew up in Germany near Muenster. He earned bachelor’s, masters and doctoral degrees in computer science from the University of Kaiserslautern.

In 2003, Wischgoll began postdoctoral research at the University of California-Irvine and two years later joined the faculty at Wright State, attracted by its plans for the visualization laboratory.

“It’s kind of rare to have this type of VR equipment available at a university,” he said.