Excavating an abandoned town, fighting viral infections and restoring a prairie are among the top research stories of 2018

From excavating an abandoned town to fighting viral infections to restoring a prairie, Wright State University faculty and students are undertaking numerous and important research endeavors. Here are some of the Newsroom’s top research stories of 2018. 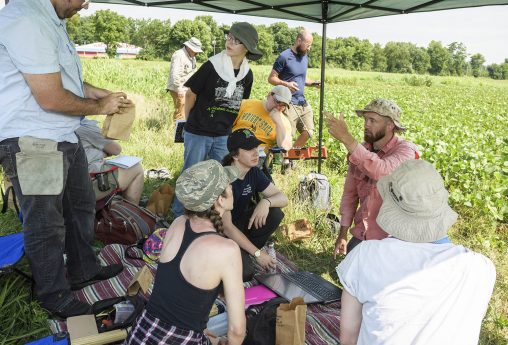 Students in the Field School in Archaeology excavated a field to learn more about life in Old Osborn, near Wright-Patterson Air Force Base.

But Wright State University students in the College of Liberal Arts Field School in Archaeology have collected evidence of the original Osborn, a town that was relocated to protect it from flooding following the Great Dayton Flood of 1913. 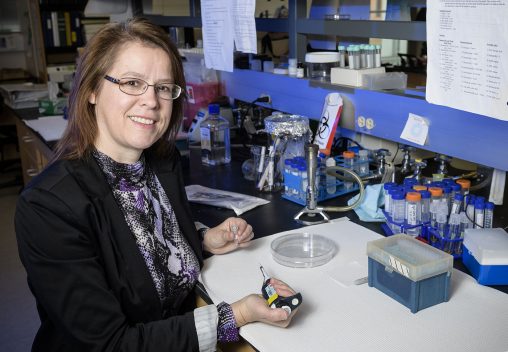 Kate Excoffon, professor of biology, received $1.8 million in funding from the National Institute of Allergy and Infectious Diseases to research an anti-viral therapy.

A team of Wright State University biology researchers is making strides on a novel approach to combatting viral respiratory infections. The work is funded by an award from the National Institute of Allergy and Infectious Diseases, part of the National Institutes of Health. The project is expected to receive approximately $1.8 million over five years.

Led by Kate Excoffon, professor of biology, the team has investigated viral receptors, which must be present on human cells in order for the virus to attach to them and cause infection. The more viral receptors, the more potential for infection. 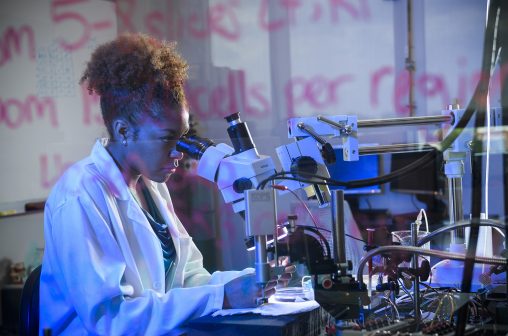 She has driven a Navy destroyer, flown a fighter jet, piloted a helicopter and even helped guide a ballistic missile submarine.

Draper received a National Institutes of Health Diversity Supplement Award, which brings scholarship money and support for her research in a lab directed by Sherif Elbasiouny, a neuroengineer who is working to develop new treatment options for Amyotrophic Lateral Sclerosis (ALS).

It may be the most beautiful spot on the Wright State University campus, but few people even know it’s there. It’s nearly two acres of restored prairie — a kaleidoscope of colorful wildflowers and dancing butterflies. A chorus of birds and insects. A dazzling display of nature.

Three years in the making, the prairie is the work of the Department of Biological Sciences. Students and faculty members hand-tossed a strategic mix of seeds designed to create a palette of plants that would blossom at different times throughout the season as well as attract and nourish birds and insects. The prairie has become a colorful carpet underneath a line of power transmission towers that straddles the campus. 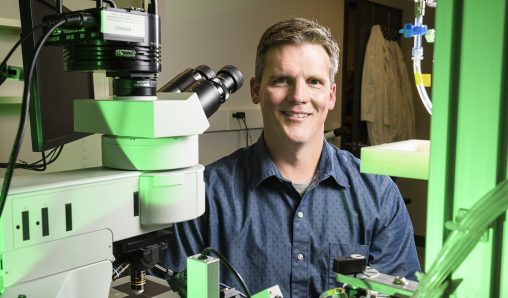 Andrew Voss, associate professor of biology, is researching Huntington’s disease with his students.

Wright State University research engineer Matthew Sherwood has received $501,000 from the U.S. Navy to study the physiological reaction to fatigue and reduced oxygen. The Cerebral Hemodynamic Studies of Hypoxia and Fatigue is a combined effort between Sherwood’s research team and the Naval Medical Research Unit Dayton.

The $501,000 award from the Naval Medical Logistics Command includes $308,000 for the two-year fatigue study and $193,000 for the one-year hypoxia study. For the past few years, Sherwood has researched an initiative that trains people to control their brain activity while undergoing functional magnetic resonance imaging, or brain scans.

Helping develop a pilotless “Air Uber” drone that could ferry medical supplies or emergency responders to disaster zones is the goal of a Wright State computer science and engineering team.

The researchers are part of an industry and university group that received $2 million from the Ohio Federal Research Network grant in support of unmanned aerial vehicle research and development. The Wright State researchers, led by Yong Pei, associate professor of computer science and engineering, were awarded $150,000 for their part of the project.

The aircraft could be useful in disaster relief as well as surveillance since the drone would be able to stay aloft for longer periods of time since there would be no human pilot. Pei said the drones could be used to deliver medical supplies to areas that pose a risk to aircraft and human pilots. 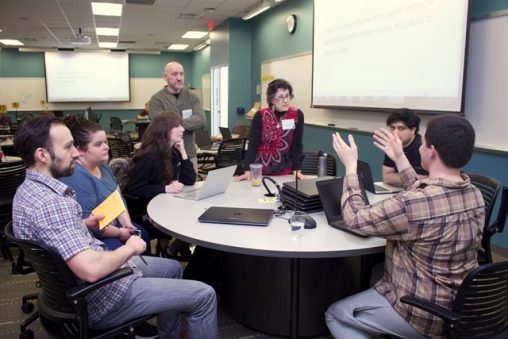 nnovation Weekend brought students from four colleges together to devise potential solutions to real-world problems in the handling of battlefield injuries and mass-casualty situations.

An intensive, three-day brainstorming exercise at Wright State University boosted the confidence of students, who came up with potential solutions to real-world problems in the handling of battlefield injuries and mass-casualty situations.

The first-ever Innovation Weekend — hosted by the College of Science and Mathematics — attracted about 35 students from four different colleges to the Student Success Center in April.

The challenge posed to the students was how to improve the medical monitoring and documentation of patients from the point of injury through all of the transport points until arrival at the final hospital destination. After nearly 48 hours of work, six teams of students presented solutions to an outside panel of experts.

Innovation Weekend was designed based on a “hackathon” approach to problem-solving that is becoming increasingly common in the private sector. The goal was to encourage and enhance an entrepreneurial and innovative mindset in undergraduate students across diverse majors. It was also designed to foster closer ties with the private sector and expose students to experiences of regional workforce relevance.

An augmented-reality system designed by Wright State researchers that puts a “doctor in the house” to help recovering surgery patients manage pain without painkillers was a winner in the Ohio Opioid Technology Challenge.

The technology was developed by Yong Pei, associate professor of computer science and engineering, and David Martineau, medical director of the Hand and Orthopedic Center of Excellence in Kettering Health Networks, along with a group of graduate researchers.

The project, in partnership with Kinematechs LLC of Cincinnati, began four years ago as part of investigating the use of artificial intelligence, augmented reality and motion analysis in applied medical research and using technology to effectively deliver health care to patients.

More research news from Wright State is available at wright.edu/university-research.