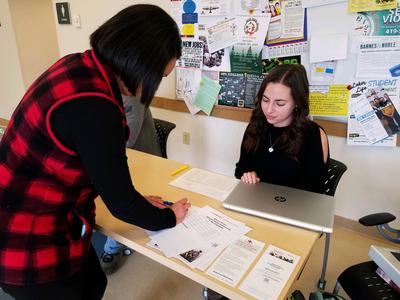 Wright State University–Lake Campus is holding several blood drives this academic year. The blood collected goes to the Red Cross to help people around the world.

The Red Cross provides humanitarian aid for millions of people worldwide, organizing disaster relief and educational programs for people on preparing for disasters. The Red Cross relies heavily on donations and sponsors hundreds of blood drives across the country.

The first blood drive this year was held was on Sept. 10 and brought in 42 units of blood, which impacts 126 lives. More than 25% of units donated came from first-time donors.

Klint said he was happy with how the drive turned out and that he was very appreciative of the hard work done by everyone involved. “Overall I am very pleased we reached our goal, especially since this was my first time being the blood drive program leader,” he said.

Klint also praised the Lake Campus community. “I think that the success of this blood drive speaks to the character of the students and staff at the WSU Lake Campus,” he said. “These people took time out of their day to donate blood that will undoubtedly be used to save lives. Their commitment to helping others is admirable and they serve as examples for everyone.”

The California wildfires have caused the Red Cross to cancel blood drives and impact the organization’s ability to collect donations. The Red Cross is encouraging those in unaffected areas to donate blood.

Wright State Lake Campus will host three more blood drives throughout the academic year, with the next one scheduled for Tuesday, Nov. 12.

Schedule a donation appointment at redcross.org. Drop-ins are also welcome.