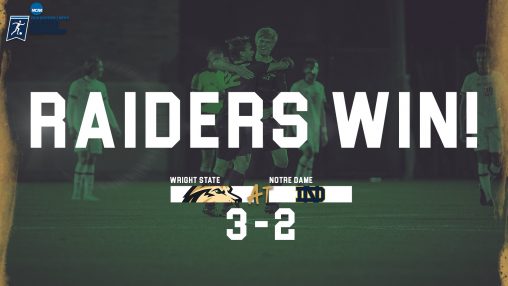 The Wright State men’s soccer team was going to make history one way or another on Thursday, Nov. 21, and the Raiders will have more chapters to write as the first-time NCAA participants went on the road and defeated Notre Dame 3–2 in the opening round of the NCAA championship.

Wright State will now play the No. 13 national seed Michigan on Sunday, Nov. 24, at 1 p.m. in Ann Arbor, Michigan. The game will be available on Big Ten Network Plus.

The Raiders took control 27 minutes into the contest, as Alex Hummel sent a header into the low corner of the post off an assist from Deri Corfe. Wright State controlled much of the first half’s remaining 18 minutes, but Notre Dame tied the game in the 51st minute on Jack Lynn’s goal via a deflected cross.

Knotted at one goal apiece, Wright State tallied back-to-back goals over a 2:15 stretch, beginning the 70th minute when Stefan Rokvic beat a Notre Dame defender and delivered a perfect pass to an open Zion Beaton, who found the back of the net for his first goal of the season.

Moments later, Corfe turned into the goal scorer himself, sending a cross deep into the back of the net for his 14th goal of the year to give Wright State a two-goal lead.

Notre Dame continued to push late, pulling to within one goal via John Rea’s 85th-minute goal, but Raider keeper Joel Sundell shut the door on any late goals in the final minutes. Sundell finished with five saves, including a big stop in the 65th minute with the match still tied at 1-1.

The Raiders were outshot 19–14 by Notre Dame, but the Fighting Irish tallied just two more shots on goal (7–5) than Wright State and both sides had six corner kick opportunities. Corfe was the only Raider with multiple shot attempts, finishing with five, including two on frame, while nine other players tallied shot attempts.

With the win, Wright State becomes the 14th Horizon League men’s soccer team to advance in the NCAA championship and the first since Oakland in 2014.