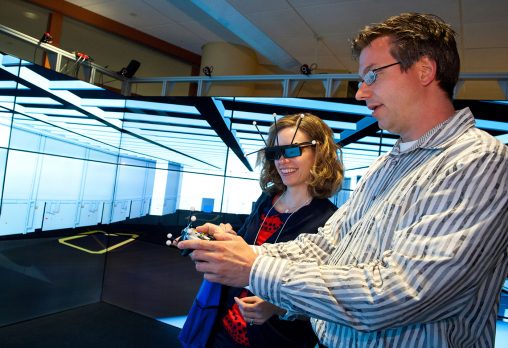 Thomas Wischgoll, director of the Advanced Visual Data Analysis group in the College of Engineering and Computer Science, showing a head-mounted virtual reality display in the Appenzeller Visualization Lab.

A global tech firm that oversees its U.S. operations from a Dayton suburb has entered a partnership with one of the region’s largest universities. The project will further enhance workforce training for the Miami Valley.

Virtalis, a U.K.-based software provider that operates locally in Kettering, has partnered with Wright State University to provide the school with a next-generation virtual reality (VR) system that will enable the university to expand its high-tech workforce training initiatives.

The system — a full-scale, walkable display enclosure — combines two Virtalis products: ActiveCube and Visionary Render VR software. ActiveCube is a multi-sided VR cave with enabled floor projection, which will allow students to visualize complex assemblies that would not be possible in alternative virtual environments.

“This technology is the best-priced performance solution available,” said Paul Ewing, vice president of North American operations for Virtalis. “In addition, our Visionary Render VR software will be used to support job training and drive future technologies at Wright State.”

The system will be housed in the university’s Appenzeller Visualization Laboratory, which is operated and supported by the Advanced Visual Data Analysts (AViDA) group at Joshi Research Center.

Launched in 2007, the $2 million lab enables businesses to outsource VR work without having to buy the technology themselves. Historically, the lab has partnered with several local companies — including Wright-Patterson Air Force Base and Tipp City-based Sloan Gear International, Inc. — to provide design work and display it in a VR environment.

The new equipment should be installed by early 2020 and will be available for student and faculty use. Dr. Thomas Wischgoll, professor of computer science and engineering and director of the AViDA group, said the university is aiming for a January installation date.

Wright State purchased the system with grant support from the Ohio Department of Higher Education which covered the investment in full. That funding, a workforce development award totaling nearly $540,000, is part of the department’s Regionally Aligned Priorities in Delivering Skills (RAPIDS) program and was given to Wright State in September 2018.

The university launched a bidding process to select a third-party provider for the new equipment. Virtalis was one of several companies — including Iowa-based MechDyne Corp., among others — that submitted bids for the project.

“Essentially, the idea is to use it for more hands-on training,” Wischgoll said. “It opes up a lot of opportunities from that perspective.”

“The advantage of VR is it’s a safe environment,” he said. “You can expose people to pretty much anything without putting them at risk.”

Students and faculty from the departments of psychology, engineering and nursing are among those who use the existing Barco system, Wischgoll said. Those departments plan to work with the Virtalis system as well.

Based in Manchester, Virtalis is an advanced solutions provider that provides immersive visualizations using VR software and technology. The company oversees its North American operations from its offices in Kettering, a suburb of Dayton.

Wright State University is the third-largest higher education institution in the Dayton region by total enrollment, according to DBJ research. The college serves more than 13,000 students and employs more than 3,000 workers.