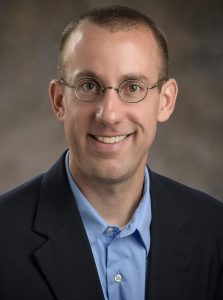 Brian Rigling is the new dean of the College of Engineering and Computer Science.

Brian Rigling, who has served as interim dean of the Wright State University College of Engineering and Computer Science, has been named the college’s permanent dean, following an internal search, effective Dec. 1.

As interim dean, Rigling ensured the College of Engineering and Computer Science continued to have an impact on the region and advance new initiatives to serve its students and regional employers. The college’s engineering and computer science graduates are pursued nationally with strong regional representations at Wright-Patterson Air Force Base, defense contractors, research labs and private businesses.

“I look forward to continued collaboration with the college’s many regional partners, alumni and local employers who provide resources and opportunities for our students,” Rigling said.

During his time as interim dean, Rigling led the college’s application to the American Society for Engineering Education’s Diversity Recognition Program, earning Bronze Recognition, the highest honor available in the inaugural program, and one of only three colleges in Ohio to do so.

Rigling is enthusiastic about the college’s numerous strengths: its students are highly employable and generally command the highest starting salaries among all undergraduates; it has a large number of faculty with national and international reputations; its researchers have received record amounts of grant and contract funding; and it maintains strong ties with local industry and numerous collaborations with other universities.

“This college and its programs will continue to adapt to the changing needs of our students and employers while embracing new and emerging technologies,” he said.

He joined Wright State as a faculty member in the Department of Electrical Engineering in 2004. He was named Brage Golding Distinguished Professor of Research in 2016.

He has also served as director of the National Science Foundation’s IUCRC Center for Surveillance Research led by Wright State and works annually in support of the Air Force Research Lab’s Center for ATR summer program.

Rigling is an internationally awarded authority in sensor signal and image processing, with an expertise on synthetic aperture radar and waveform optimization. In 2015, he received the Fred Nathanson Memorial Radar Award from the Institute of Electrical and Electronics Engineers (IEEE), the world’s largest association of technical professionals, and in 2018, was named an IEEE Fellow.

He has served as a program evaluator for engineering programs at universities nationwide for the standard-setting ABET accreditation board since 2013 and has served as a peer reviewer for the Higher Learning Commission since 2017.