A reunion of Doolittle’s Raiders at Wright-Patterson Air Force Base fired the engines that led to a documentary film series on aircraft restoration by Wright State University motion pictures alumnus Adam White airing nationally on PBS.

The reunion and a gathering of historic B-25 bombers are part of “The Restorers — Season 1,” a new historical aviation series that examines warbird and vintage aircraft restorers and the planes they resurrect from the graves of history.

The five-part series begins airing in Dayton on April 26 at 2 p.m. on ThinkTV Channel 16. It is also being distributed nationwide and outside of the United States.

The Doolittle Raid, led by Lt. Col. James Doolittle, was a 1942 World War II air raid on Tokyo and other Japanese targets. The raid demonstrated that the Japanese mainland was vulnerable to American air attack, served as retaliation for the Japanese attack on Pearl Harbor and boosted American morale. The Doolittle Raiders were made famous by flying B-25s, and the 68th reunion at the National Museum of the United States Air Force at Wright-Patterson in 2010 attracted B-25s from around the country.

White was grateful for the gathering even though he wasn’t exactly prepared for it.

“We decided whether we were ready or not, we were going to start shooting this series,” he recalled. “We funded that episode ourselves before we had any investors because we just didn’t have enough time.”

In 1999, White had launched Hemlock Films, a Cleveland-based video and film production company that has produced international award-winning films as well as commercials, industrial videos and support work for feature motion pictures.

In 2003, White produced an Emmy Award-winning film of the same title as the new series, “The Restorers.”

“When we did that one-hour piece, it was very clear that there were more airplane restoration stories than we could fit into a one-hour release,” he said. 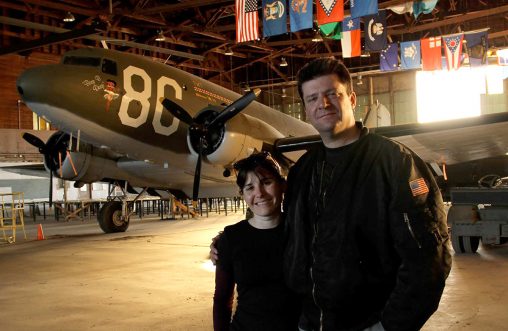 So in 2013, White and his wife, Kara, began working on “The Restorers” as a series — Adam as director and Kara as producer.

Each one-hour episode is themed, containing several stories within each episode. The five episodes are titled: “Living History,” “Aircraft Recovery,” “The Aviatrix,” “Aviation Destinations” and “They Were All Volunteers,” which was filmed at the Doolittle Reunion in Dayton.

Filming the series took the Whites all over the country to a variety of locales and in search of a variety of different stories.

“We didn’t want it to just be fighter airplanes or bombers; and not just from World War II,” Adam White said. “We went to Kitty Hawk, where they still fly Wright gliders. We went to the Old Rhinebeck Aerodrome in New York, where they do World War I airplanes. Then we went out to California, where some of the most famous warbird museums in the world are sitting.”

White’s favorite part of doing the series was being able to meet veterans associated with the aircraft.

“Most of the time people restore these airplanes to tell somebody else’s story. We tell the restorers’ stories and through that we’re able to tell these veterans’ stories,” he said. “We got to meet World War II veterans, Vietnam veterans, aviation mechanics from all over the spectrum.”

White grew up in the Cleveland area and developed an early interest in photography. After graduating from West Geauga High School in 1989, he came to Wright State.

“Wright State had a good reputation for its film making program,” he said. “At the time, it seemed a little pie in the sky because most people in the Midwest don’t have that option for a career. But I went down that road nonetheless and just kept going. I was working on movies and commercials while I was going to school.”

“Through the curriculum I received there I was able to look at cinema in a lot of different new ways than what you would get growing up,” he said. “The second thing was being thrown in with a lot of different students who are just as hungry as you and you are all able to grow and develop together. Several of those students I still maintain contact with and work with.”

After earning his bachelor’s degree in motion picture production in 1995, White returned to northeast Ohio and continued working in the industry.

He said “The Restorers” is more than just a film series for aviation enthusiasts.

“What we are hoping is for people to have a greater appreciation of history,” he said. “But if we can inspire future aviating and not just look to the past, that would be grand in our minds.”