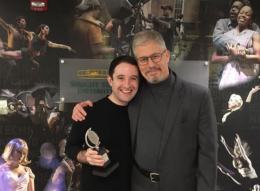 It’s been a challenging year for Broadway, but the nominations for the 74th annual Tony Awards — announced Oct. 15 and recognizing the shortened 2019-2020 season — is cause for celebration.

Tony Award-winning 2012 Wright State University musical theater graduate Joey Monda of Sing Out, Louise! Productions is a double nominee for producing Best Play contenders “The Inheritance” (11 nominations) and “Slave Play” (12 nominations, the most ever for a play).

Written by Matthew Lopez and inspired by E. M. Forster’s novel “Howards End,” “The Inheritance” addresses the desires, pitfalls, complications and tragedies within New York City’s gay community circa 2015 to 2018. The play, a modern companion to Tony Kushner’s equally resonate “Angels in America” in many respects, notably received the Olivier Award for its London premiere in 2018. Jeremy O. Harris’ controversial, thought-provoking “Slave Play” spotlights race and sex in America. Using a plantation as a backdrop but firmly planted in contemporary anxieties and polarization, Harris throws expectations out the window while exploring the complexities of interracial romance.

“These nominations speak to the power of the work and the conversations we’re having as a culture and a country right now,” said Monda, a Youngstown native who won the Tony last year for producing Anaïs Mitchell’s beautiful, dark jazz musical “Hadestown” and was recently named WSU’s 2020 Graduate of the Last Decade. “The fact that both plays were on Broadway before our country’s moment of social uprising and social upheaval just goes to show that it was already in the DNA. Imagine if shows were still running on Broadway and ‘Slave Play’ in particular was still playing at the time of George Floyd’s death. Imagine the play’s (impact), which was already so culturally resonate by speaking to audiences in such a unique way. Matthew Lopez and Jeremy Harris weren’t writing what they didn’t know. They were writing what they felt was already present in the culture. And we are now able to have more articulate conversation about the issues both brought up.”

News of Monda’s nominations came as no surprise to his alma mater.
“It is incredibly exciting to see Joey Monda continuing to produce some of the most exciting theater in the world,” said Joe Deer, Chair of Wright State’s Department of Theatre, Dance and Motion Pictures. “The Best Play nominations for ‘Slave Play’ and ‘The Inheritance’ speak powerfully to his taste for cutting edge new drama and his willingness to risk so much to tell stories that matter today. Who could imagine that these two plays about the continuing experience and legacy of gay men in America and our legacy of racism would seem so prescient for the chaotic world of 2020? I know Joey has helped create his own legacy of theater that matters and speaks to the most intelligent audiences. I’m proud to call him an alumnus of this department and a theatre-maker I admire deeply.”
Monda is encouraged by the nominations, especially the attention it brings to the Broadway community at such a critical time, but the feeling is bittersweet. When the nominations were revealed, he was facing the harsh realities of the business. He spent the day moving his company’s office furniture into storage.
View the original story at daytondailynews.com