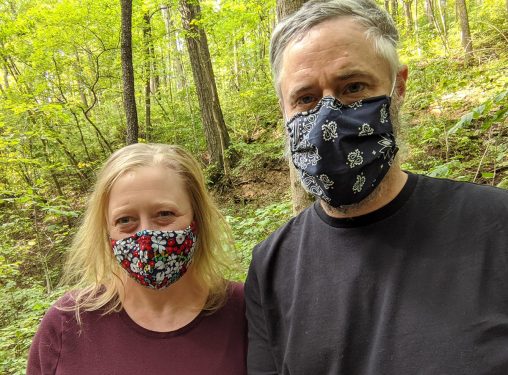 A novel new course that mixes biology and English majors to teach them storytelling about extinctions, mutations, invasions and other environmental phenomena is unfolding at Wright State University.

Rooney said that in a world faced with growing environmental challenges, the class emphasizes the importance of effective storytelling from both scientific and literary perspectives.

The seeds of the course were planted when Jennings asked Rooney how she and her students could access the campus woods for a literature course. That led to a conversation about how to bring science and literature students together and bridge gaps between the humanities and the sciences.

“Scientists and humanities scholars really need to collaborate on a lot of current issues,” said Jennings. “One discipline is not going to have all the answers. If we can think through these issues together, we might be able to come up with a much more effective framework for engaging with the world around us.”

“Our biology students are quite good in the laboratory and the field making their scientific observations and doing their Dragnet science of ‘just the facts.’ But what they were missing were additional perspectives,” he said. “So this is really an opportunity to broaden perspectives and think more creatively and think more critically about their practice.”

Kendra Moran, a biological sciences major from Beavercreek, took the class in part because of its discussion about the complexity of altering the planet.

“Before now, I’ve mostly been focused on the science of conservation and not how our efforts to save the planet may impact different groups of humans,” she said. “It is interesting to discuss the possible repercussions of conservation efforts from different perspectives.”

“I hope to come out of this class and into a career with new ideas on how to tackle climate change and wildlife conservation,” she said.

Students are asked to think about different modes, patterns and forms of narrative practices when telling eco-centered stories and the necessity of collaborative storytelling when addressing the complexities of environmental conditions. Students are taught to:

The class is a blend of biology, English and communication majors.

Alexis Voisard, a senior English major from Cedarville, said she decided to take the class after becoming more politically engaged in climate change.

“Taking this eco-narratives course is one step I can take to understand how scientists and humanities scholars can collaborate to try to move forward in a positive direction,” she said.

Voisard believes the class will help her in her career in the digital media field by enabling her to think outside the box when solving really big problems.

“I think it will also encourage me to be aware of environmental choices that my future companies and employers make and to make a conscious effort to incorporate positive company values to how we treat the environment and the impact of carbon footprints,” she said.

Students write eco-narratives about specific environments and address topics such as extinctions, restorations, invasions, mutations, adaptations, nature cultures, nonhuman life cycles, place histories and human/nonhuman encounters. In one assignment, students researched a specific species and created stories about them. For their final project, groups of students will work together to tell a story of encounters between humans and nonhumans and then weave each student’s narrative into a cohesive story.

“It is the kind of collaborative storytelling that we hope to see between scientists and humanities scholars,” said Jennings.

Weekly lectures are in the form of podcast discussions between Jennings and Rooney. Students participate in weekly online class discussions of assigned readings.

Readings include “Dawn,” a novel about a woman who awakens 250 years after a nuclear holocaust on a ship orbiting Earth, which aliens are attempting to regenerate and make habitable. Also required is “Annihilation,” a novel about a mysterious area cut off from the rest of the United States.

The course website enables students to download podcasts, video files, PowerPoints, and course readings. The students are also learning how to make their own websites.

Jennings said the course has shown the literature students different career options available to them.

“We need people who can write good environmental stories,” she said. “I think this is a real skill-building set for students.”

Jennings and Rooney hope to teach the course again in the future.

“The students are really engaged,” said Jennings. “One biology student told me she has begun thinking more philosophically about what she does. That was a really exciting thing to hear.”