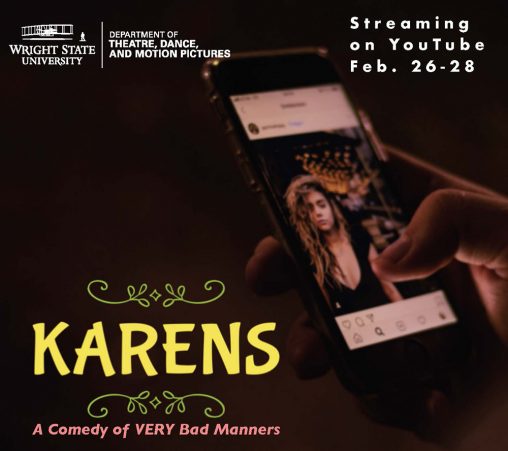 Wright State University Theatre will premiere a video-only production of “KARENS: A Comedy of Very Bad Manners” on Feb. 26–28.

Donations to the Theatre Arts Fund can be made on the department’s website.

“KARENS” is written, directed and edited by Bruce Cromer, actor, director and professor of acting at Wright State. The play is adapted from Moliere’s social satire “The Learned Ladies.”

Students in the production filmed online from across the United States and Canada. Cromer said that producing “KARENS” has been a delight, highlighted by virtual rehearsals filled with laughter.

“We’re all doing something brand new, a world premiere, including the way we’re acting, filming/recording and editing the production,” Cromer said. “It’s a brave new world for this 64-year-old stage actor, who never directed a film before, not even for the internet.”

“KARENS” and other works in the current Theatre, Dance and Motion Pictures season have been created in response to health restrictions required by COVID-19. In addition to “KARENS,” Wright State will present two streaming musicals, two classic dramas, two streaming dance concerts, an outdoor student works festival and the Big Lens Film Festival.