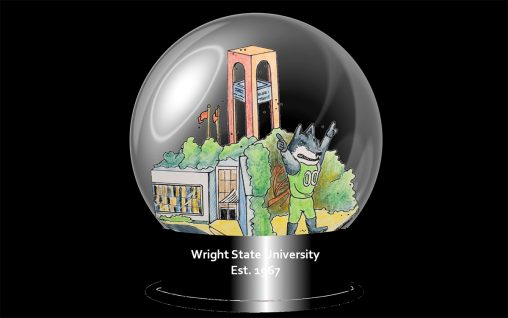 To encourage contributions to the ArtsGala Scholarship Fund, the College of Liberal Arts partnered with Global Love Dayton to create a limited-edition snow globe featuring some of the most iconic buildings and landmarks on Wright State’s campus.

For the second year in a row, Wright State University’s ArtsGala has been canceled due to the COVID-19 pandemic. While ArtsGala organizers had hoped to host an in-person event, they have pivoted to other fundraising initiatives to raise money for scholarships for Wright State students in the fine and performing arts.

“We looked at all different options, from moving the event to fall 2021 to hosting a virtual event,” said Nick Warrington, director of events and community engagement for the College of Liberal Arts. “While we remained optimistic as vaccines were coming out, we still had to plan an event with all of the necessary COVID safety protocol. What it ultimately came down to was whether we could put on the same quality of event that ArtsGala patrons have experienced over the last 20 years. At the end of the day, we decided that we didn’t want to risk the reputation of ArtsGala by providing an experience that did not live up to previous events.”

With the pandemic restricting the number of tickets that could be sold, moving forward with the event also created financial challenges.

“The mission of ArtsGala is to support our scholarship fund,” Warrington said. “By hosting an in-person event with all of the required safety measures, we would have incurred additional expenses that would have prevented us from raising as much money for the ArtsGala Scholarship Fund.”

After deciding to cancel this year’s festivities, Warrington and the ArtsGala host committee quickly shifted their attention to creating new opportunities to support the scholarship fund. In a typical year, ArtsGala raises $200,000 for student scholarships.

“That is still our goal this year,” said Warrington.

To encourage contributions to the ArtsGala Scholarship Fund, the College of Liberal Arts has partnered with Global Love Dayton to create a limited-edition snow globe featuring some of the most iconic buildings and landmarks on Wright State’s campus including Alumni Tower, the “Turning Points” sculpture, the Wright State Nutter Center, the Boonshoft School of Medicine and the Creative Arts Center, where ArtsGala takes place. The university’s athletic mascot, Rowdy Raider, is also prominently showcased in the snow globe.

Only 250 snow globes will be available for purchase with proceeds going directly to the ArtsGala Scholarship Fund. Snow globes are $125 each and can be pre-ordered online at wright.edu/snowglobes. 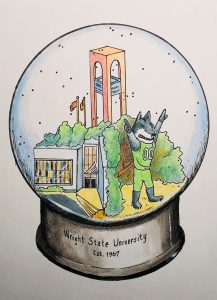 Snow globes will be available to pick up on campus in October — just in time for the holiday season — or they may be shipped anywhere in the continental United States for an additional $10.

ArtsGala scholarship recipients and other students in the fine and performing arts will participate in a phoneathon campaign, where they will contact previous ArtsGala patrons to thank them for their attendance at prior events and request their continued support of student scholarships.

Gifts to the ArtsGala Scholarship Fund can also be made online at wright.edu/artsgala.

This year’s ArtsGala co-chairs are Hugh and Kathie Thornburg. As champions of the arts in the Dayton community, they hope the community will consider supporting the amazing students at Wright State during these unprecedented times.

The ArtsGala Scholarship Fund would not be possible without the continued support of sponsors and donors. Presenting sponsors for ArtsGala 2021 are Cincinnati Bell, Morris Furniture and Barnes & Noble. Additional sponsors include Wright–Patt Credit Union, Emerson and WesBanco. A complete list of sponsors can be found at wright.edu/artgala.

Dayton Classical Radio will broadcast a two-hour concert featuring students from Wright State University’s School of Music on Saturday, April 17 — the date that ArtsGala was scheduled to take place. The concert airs at 10 a.m. on WDPR 88.1 FM.