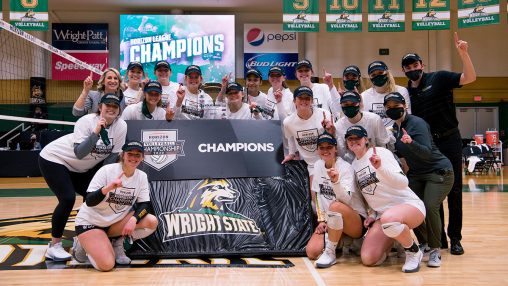 Fresh off its first Horizon League championship in program history, the Wright State volleyball team will take on Samford in the opening round of the NCAA Volleyball Championship.

The Raiders will take on the Bulldogs on Wednesday, April 14, at 7 p.m. The match will be televised on ESPN3.

The Wright State-Samford winner advances to take on the No. 4 overall seed Texas in the second round on April 15. The NCAA Volleyball Championship will be played in a neutral-site format in Omaha, Nebraska.

The Raiders punched their ticket to their second NCAA Championship on Saturday, taking down UIC in a thrilling five-setter to give Wright State its first tournament title in program history. Nyssa Baker was named the Horizon League Tournament MVP, while Mallory Ladd and Celia Powers were each named to the All-Tournament team.

Wright State played just third five-set matches this spring and only had six matches that went more than three sets on the way to running through Horizon League play undefeated.

Samford earned its third consecutive, Southern Conference Tournament title, and four out of the last five years, under head coach Keylor Chan. Samford is led by outside hitter Lauren Deaton, who was named the conference tournament’s Most Outstanding Player and the league’s Player of the Year. Sierra Rayzor and Corinne Meglic joined Deaton on the All-Conference team and Kenya McQuirter was named the league’s Freshman of the Year.

The Raiders and Bulldogs have met once before, in September 1994, a 3-0 Wright State win as part of the Billiken Invitational in St. Louis.

Wright State enters the NCAA Championship with a 16-1 overall record and was undefeated in Horizon League play on the way to its second consecutive Horizon League regular season title, while Samford holds a 15-3 overall mark.