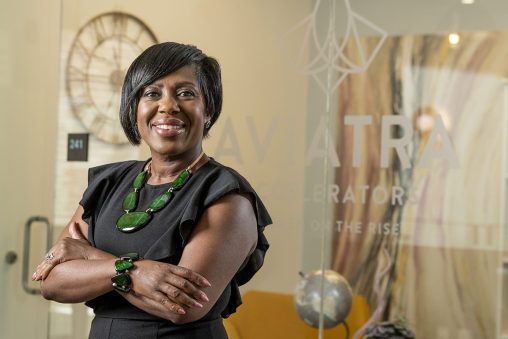 It was born in her basement during the COVID-19 pandemic.

Since then, Aviatra-Dayton, a nonprofit organization that supports women in business, has served more than 200 entrepreneurs since its inception, ranging from those who sell women’s apparel online and provide staffing to those offering music therapy to youths.

“Even though we launched at the onset of the pandemic, I believed there would be existing women business owners who would need assistance with learning how they could do business during the global pandemic, and we could help them figure out how to pivot,” said Pamela Cone, a Wright State University communication alumna and director of Aviatra-Dayton.

Aviatra has an office at The Hub, a space with resources for entrepreneurs, inventors, students and others to create and support new businesses. The Hub is located in downtown Dayton’s historic Arcade, a sprawling complex of five connected buildings crowned by an ornate rotunda.

Cone became director of the nonprofit in March 2020 with the help of a $150,000 donation from her former employer and Aviatra alum, Robin Gentry McGee. McGee was recently honored by Dayton Mayor and Wright State graduate Nan Whaley with a proclamation for her contribution and bringing the resource to Dayton.

Cone began holding virtual conferences with clients in July 2020, providing information to them on such topics as how to interface virtually and how to apply for funding for personal protective equipment.

By September 2020, Aviatra–Dayton was helping women establish businesses with its first Explore cohort of 12 participants. Aviatra-Dayton is in its third cohort and has hosted many events both virtually and in person.

Cone said one in every five new U.S. businesses is started by a woman, most of them women of color. But she said the average male-owned business produces far more revenue, creating a huge gap.

“It’s like the Gulf of Mexico,” she said. “I think it’s because of knowledge – the true knowledge of how to start a business and get access to resources.”

Another factor, Cone said, is that many female entrepreneurs lack confidence and support requiring some coaching and mentoring. She said the most gratifying thing for her is helping budding entrepreneurs realize that they can succeed, helping them develop a business plan, and preparing them to pitch their business idea to investors and those from which they would like to solicit support.

Cone’s office is a branch of the Cincinnati-based Aviatra Accelerators, which in its 11 years has served more than 2,700 women entrepreneurs who have collectively amassed more than $1 billion in revenue and created over 10,000 jobs.

In September, Cone was named a 2022 Woman of Impact by the Better Business Bureau’s Women in Business Networking (WiBN) program.

Cone’s journey to Aviatra has been a long and twisting road.

She grew up with her parents and five siblings in a working-class neighborhood in Blytheville, Arkansas. After graduating in 1988 from Blytheville High School, she attended Mississippi County Community College.

Along the way, Cone would find jobs for herself.

“I’ve done everything from stuffing envelopes to managing a chiropractic clinic,” she said.

While at Wright State, Cone hosted a weekly radio show on WWSU called “Making the Connection.” The show featured Christian music and talks with guests about such things as best practices for college students, popular books, mental health, poetry, TEDxDayton and other topics.

After graduation, Cone went into a full-court press looking for a job, putting in more than 300 applications. She finally landed a marketing position with Functional Formularies, a new company that produced organic food for individuals who are tube-fed and do not digest food orally. Cone helped the company gain 10 times its return on its investment in marketing in 2018 before leaving in late 2019.

Cone said Wright State prepared her for success by teaching her how to apply her education.

“Communication is a soft-skills degree, but it’s very, very valuable for companies and organizations,” she said. “It allows for individuals to have a different perspective, to be able to think outside the box, develop critical thinking skills, to look for what’s not there building from that type of research and vantage point.”