Organized by the Office of Undergraduate Admissions, the RaiderStrong: Admitted Student Postcard Campaign was designed to introduce future students to the welcoming, friendly community that awaits them at Wright State, said Jen McCamis, director of undergraduate admissions.

“We just want people to know that Wright State cares, we’re a community,” McCamis said. “We hope that when the students receive these postcards, they feel a sense of community. That is what Wright State is all about.”

The postcards were sent to thousands of high school seniors, adult students and transfer students who have been admitted to Wright State for the Fall Semester. Many of the students have already enrolled but some are still in the process of deciding where they will attend college.

Dozens of faculty members, staff and current students volunteered to write by hand personal messages to admitted students. McCamis said she hopes the campaign makes a positive impression on students who receive postcards.

“Getting a hand-written postcard just feels good, it feels personal,” she said.

The campaign’s impact was not just limited to admitted students.

Those who volunteered to write messages said it was a fun and positive experience. Many even requested more postcards after completing their initial batch. Some volunteers even experienced cramping in their hands from writing so many. 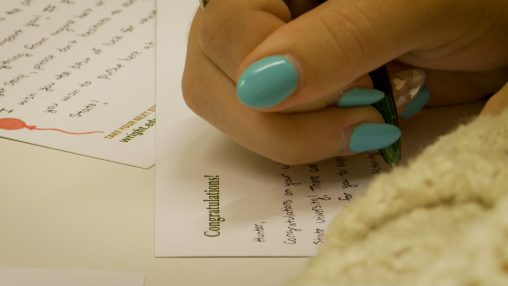 “It’s just a great way for everyone on campus to connect with our Wright State future students,” McCamis said. “We’re building community, we’re building relationships, both internally and externally.”

Admitted students can learn more about becoming a Raider at wright.edu/admit.