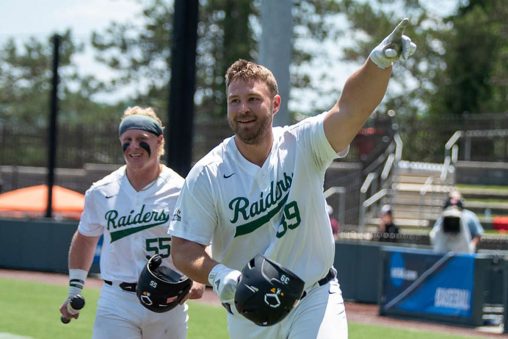 Wright State finished the baseball season with a 30-27 record, winning its fifth Horizon League Championship in the last seven seasons.

The Wright State baseball program’s season came to an end last weekend in the NCAA Blacksburg Regional at English Field.

The No. 4 seed Raiders lost 11-9 to No. 2 seed Gonzaga and 15-9 to top-seed and host Virginia Tech in the regional’s opening round.

Wright State finished the season with a 30-27 record, winning its fifth Horizon League Championship in the last seven seasons.

The Blacksburg Regional was the Raiders’ 10th NCAA Division I appearance overall.

In an elimination game on June 4, the Raiders jumped out to an early lead against Gonzaga with three runs in the bottom of the first inning.

Gehrig Anglin connected on a ground-rule double, scoring Justin Riemer from second base. Zane Harris followed with a two-run sacrifice fly as two Gonzaga fielders collided on the catch, boosting the Raider lead to 3-0.

Gonzaga answered back with four runs on three hits and two walks in the top of the third, resulting in a 4-3 deficit for the Raiders.

The deficit did not last for long as Wright State popped off for six runs in the bottom of the third frame. Harris got the scoring started with a two-run homer, followed by Sammy Sass crossing home plate on a wild pitch. Andrew Patrick then punctuated the scoring burst with a three-run roundtrip, extending Wright State’s lead to 9-4.

The Bulldogs swung the momentum to their side with two runs in the fifth inning and one run in the sixth, minimizing their deficit to 9-7. Gonzaga exploded for four runs on four hits in the top of the seventh, resulting in an 11-9 lead for the Bulldogs.

Both teams were scoreless for the remainder of the game, sealing the loss for the Raiders.

In the eighth and ninth innings, Wright State had multiple runners on base, but Gonzaga’s Owen Wild induced a fly-out and strikeout to get out of both frames unscathed.

Harris led the Raiders offensively by batting 1-for-2 with four RBI on a two-run homer and a two-run sacrifice fly. Anglin finished with a team-leading three hits, including an RBI double in his first at-bat. Patrick belted a three-run homer for his lone hit of the game, while Julian Greenwell and Jay Luikart reached base twice on a single and a walk. 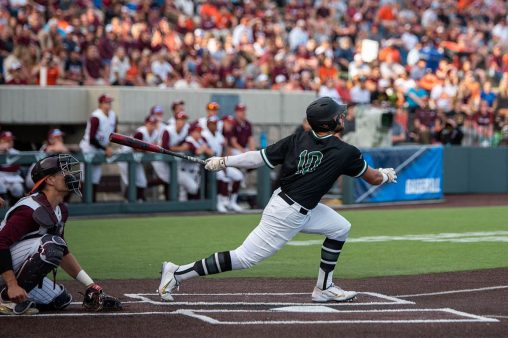 The Raiders erased an early five-run deficit but lost to host Virginia Tech 15-9 in the opening round of the NCAA Blacksburg Regional.

The Wright State baseball program erased an early five-run deficit, but No. 4 Virginia Tech finished on the winning side of a 15-9 contest in the opening round of the NCAA Blacksburg Regional on June 3.

The Hokies jumped out to a 2-0 lead in the bottom of the first inning, as VT’s Gavin Cross connected on a two-run homer with no outs.

Wright State threatened with two runners on base in the top of the second inning, but Tech induced a groundout to get out of the frame unscathed. The Hokies pushed across runs on an RBI single and a double steal in the bottom of the second to increase their edge to 4-0.

The momentum continued favoring the regional host as Cade Hunter extended Virginia Tech’s lead to 5-0 with a solo home run in the bottom of the third inning.

The Raiders began their rally in the top of the fourth inning with two runs on five hits, including RBI singles off the bats of Sammy Sass and Jay Luikart. In the top of the fifth, Sayre plated Justin Riemer and Julian Greenwell on a two-run double, reducing Wright State’s deficit to 5-4. Alec Sayre scored later in the inning on a sacrifice fly by Sass with the bases loaded, tying the game at 5-5.

However, the Hokies took the lead back in the bottom of the frame with five runs on five hits and an error.

Trailing 10-5, Wright State stormed back again with three runs on three hits in the top of the sixth inning.

Greenwell started the scoring with an RBI double, and Harris followed with a two-run single.

The Raiders had an opportunity to even the score with runners on second and third. However, Virginia Tech’s Christian Worley recorded a strikeout to end the frame without further damage.

The Hokies pulled away with five runs over the next two innings, including a four-run eighth inning.

Greenwell notched an RBI double in the top of the ninth for the Raiders, but it was not enough to spark a comeback, as Virginia Tech sealed a 15-9 victory.

Harris led Wright State in the loss, going 3-for-3 with a walk and two runs batted in. Sayre went 2-for-4 at the plate with a walk and two RBI, while Greenwell had a pair of RBI doubles to go along with two runs scored. Luikart hit two singles and drove in a run. Sass pushed across two runs on an RBI single and a sacrifice fly.

Wright State finished with 13 hits but stranded 12 runners on base. Meanwhile, Virginia Tech lived up to its hype offensively with 15 runs on 19 hits, including seven for extra bases.