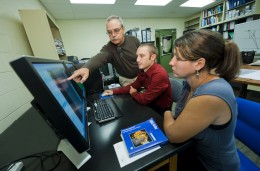 Wright State will be using the software to train students in oil and gas exploration, the cleanup of contaminated brownfield sites and even the detection and mapping of artifacts at archaeological sites.

In a Wright State University lab, seismic and well log information fed into a computer are blooming into colorful, three-dimensional images of underground deposits, rock formations and reservoirs filled with oil and gas.

Staring in wonder at the monitor are two graduate students who are more accustomed to interpreting such data from wiggly lines printed on large sheets of paper.

“It’s hard to visualize just squiggly lines, and to know what they mean. But when you can render them as a visualization of the geology, it helps,” said Scott Bey, a grad student from Columbus who hopes for a career in the oil and gas industry.

The computer software that transforms this data into a subterranean vision is a $5 million gift to Wright State from Schlumberger Limited, the world’s largest oilfield services company and also a leader in environmental services.

“Wright State University is most appreciative of this incredibly generous gift from Schlumberger Limited,” said Wright State President David R. Hopkins. “Thanks to Schlumberger, our students will have the opportunity to become proficient in state-of-the-art technology, preparing them for the jobs of tomorrow in our region, state and beyond.”

The gift includes the company’s Petrel visualization package and its ECLIPSE reservoir-flow modeling package. These are industry-standard applications used to understand both the geological setting and the flow of oil and gas in reservoirs, and also the flow of groundwater in aquifers.

David Dominic, Ph.D., professor of earth and environmental sciences and interim chair, said the software is Schlumberger’s largest gift ever to the department.

“The ability to visualize reservoirs and model the flow of fluids within them makes the combined software incredibly powerful,” Dominic said.

Wright State will be using the software to train students in oil and gas exploration, the cleanup of contaminated brownfield sites and even the detection and mapping of artifacts at archaeological sites.

“By granting Wright State access to these software packages for classroom and for research, Schlumberger will enable the faculty and the graduate students here to receive training unsurpassed by any other graduate program, including schools like the University of Texas, and others with big petroleum engineering programs,” said Robert Ritzi, Ph.D., professor of earth and environmental sciences. “These students will enter the job market already up to speed with the state-of-the-art modeling software used in the industry.”

Wright State has a well-established program and a strong reputation for applied geophysics, hydrogeology and environmental science. Ritzi said Wright State has long been unique among schools in the Midwest because petroleum companies have sought out its students.

“They have this mix of background in geology and applied geophysics that kind of fills a niche in the oil industry,” Ritzi said. “And Wright State students are also highly sought by the environmental services industry.”

Ernest Hauser, Ph.D., associate professor of geophysics, said the Schlumberger software will significantly advance Wright State’s ability to prepare students for today’s oil and gas industry, where they can earn annual salaries of $100,000 and more.

“The generosity of the company to donate this software to us to allow us to train our students is incredible,” he said.

Hauser said the software will give students such things as a greater ability to discover and map gas and oil deposits, gauge how much oil or gas in an underground reservoir has been extracted and even determine the directional flow of groundwater contaminants in a brownfield site.

“We are in an era of global competition, and this kind of state-of-the-art technology will help prepare our students to enter into the job market with marked advantage,” said Yi Li, Ph.D., dean of the College of Science and Mathematics. “It is also very timely given the need to prepare the workforce for the expansion of exploration and development of future energy resources in Ohio.”

Ritzi said the software could also be used to create models for the underground storage of industrially produced carbon dioxide in order to slow the accumulation of greenhouse gases and global warming.

In addition, Hauser said, the software can also be used in archaeology, to help in the visualization of ground-penetrating data to locate and map artifacts.

Danielle Torridi, a grad student from Boston who is working toward a career in geoarchaeology, said training on the new software would enable her to determine where best to excavate.

“Maybe I would be able to see a walking path that prehistoric people used,” Torridi said.