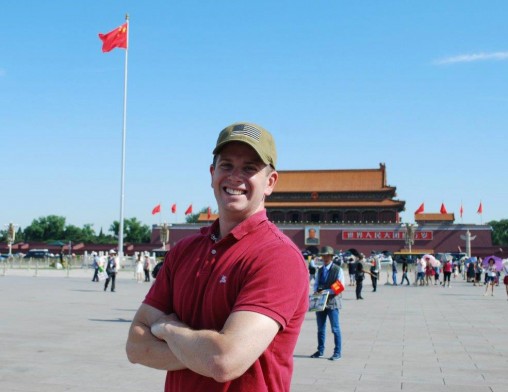 Morgan O’Brien, a 2007 Wright State graduate and foreign service officer with the U.S. Department of State, landed a fellowship with the NBA.

O’Brien is helping to promote the international marketing of basketball and to cultivate the next generation of international talent supporting the NBA’s Basketball Without Borders program.

The program hosted a highly successful basketball camp in Toronto organized around February’s NBA All-Star Game and this summer will have camps in Africa, Asia, Europe and South America.

O’Brien also handles requests from the NBA’s 100 international players who are acclimating to life in the United States.

“Sports are an incredibly valuable tool to bring together people from different cultures,” he said. “The State Department finds tremendous return on investment through the ability of sports to teach teamwork, hard work, the ability to follow rules and empowering underserved populations.”

O’Brien, who lives in Fairfax, Virginia, is a foreign service officer with the U.S. Department of State and is currently assigned as an International Affairs Fellow with the Council on Foreign Relations, an independent think tank based in New York.

He sees his one-year fellowship with the NBA as an opportunity to learn from the league’s success promoting basketball internationally and to apply those lessons to improve the State Department’s sports diplomacy programs.

O’Brien grew up in the Long Island, New York, town of Oceanside, where his parents ran a floor and carpet maintenance business. When O’Brien was a senior in high school, he won an Air Force ROTC scholarship to the University of North Carolina at Chapel Hill, where he double majored in political science and Russian language and literature, graduating in 2001.

O’Brien graduated from Wright State in 2007 with a master’s degree in international and comparative politics.

“The professors and my cohort at Wright State were incredible — high-quality people who pushed me to be my best while also understanding that I was an Air Force officer serving during wartime,” he said. “I’m still in close contact with my thesis adviser, Dr. Laura Luehrmann, nearly 15 years after I started my journey.”

In 2007, O’Brien joined the State Department as a public affairs specialist at the U.S. Mission to the United Nations in New York City and two years later became a foreign service officer.

From 2009 to 2010, he was the special assistant to Ambassador Richard Holbrooke, the special representative for Afghanistan and Pakistan who was perhaps best known for helping broker a peace agreement among the warring factions in Bosnia that led to the signing of the Dayton Peace Accords in 1995.

“He was a great man and a titan of diplomacy,” O’Brien said. “To work for him with such a great team so early in my career was an honor.”

O’Brien later became the U.S. consul to the Republic of the Congo at Embassy Brazzaville and then the cultural affairs officer for the State Department’s Sports Diplomacy office.

O’Brien said his degree from Wright State has opened doors of opportunity for him time and time again. He advises students to take advantage of the university’s relatively small size.

“The professors are incredibly accessible, and the intimate nature fostered by the school’s small class sizes and motived cohort created an environment that I found similar to a startup/incubator,” he said. “I’m very proud of my degree and thankful at how affordable everything was as well.”