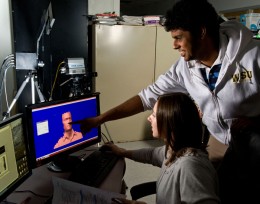 You’re a freshly minted high school grad strolling down the street of your small Ohio hometown, giving a nod to the village barber, your former coach and the girl next door.

The next thing you know, you’re a rifle-toting soldier. And the streets you’re walking are those of Afghanistan, where you encounter people who speak Pashtu and Dari, pray five times a day, and where buzkashi is the national sport.

Extreme culture shock greets many deployed soldiers, who have to tiptoe through a social minefield as they try to bond with and befriend the local natives in an effort to forge a front against insurgents.

“We send our brand new soldiers who likely have never been outside the United States to a different country and expect them to interact with the populace. That’s not realistic,” said Julie Skipper, Ph.D., of the Wright State Research Institute.

Skipper and fellow researcher Jennie Gallimore, Ph.D., director of Wright State University’s Center of Excellence in Human-Centered Innovation, have been awarded a grant to give soldiers realistic cultural training by creating virtual humans. These avatar-like figures would be infused with personality and actual cultural representations of behaviors, gestures, facial expressions, speech patterns, pose and both verbal and non-verbal cues.

The grant is from the Leonard Wood Institute, which funds projects designed to improve training and force protection for the Army.

“Every branch recognizes that cultural-awareness training is important, but there is limited time to perform that training,” said Skipper, associate research professor and biomedical engineer. “And there is very little realism involved in that training.”

“They will have soldiers watch the movies en masse, and they’ll pause the movie and say, ‘What did that person do right or wrong? How could they have caused a better outcome in that situation?'” Skipper said.

Some officers go through more intensive, one-on-one training, but it is usually reserved for select soldiers expected to interact heavily with the local population.

“To me, the most interesting thing about human communication is the subtle expressions we manifest,” Skipper said. “Even though avatar animation is quite sophisticated, their faces are pretty bland, pretty stoic. So we’re trying to incorporate those microexpressions.”

Most of the research will be done at Wright State. The researchers hope to do much of the work at the Joshi Research Center, which houses daytaOhio’s virtual-reality lab.

The researchers plan to bring in people of Arabic background as well as subject-matter experts. Expressions reacting to scenarios will be recorded in a laboratory setting.

“We want to record those true emotional responses,” Skipper said.

For example, efforts will be made to make the Arabic subjects angry so they drop their guard. They will be monitored to see when they make and break eye contact, and how much personal space they give people with whom they interact. And the meaning of their gestures will be scrutinized since gestures can mean totally different and sometimes opposite things in different cultures.

“We can capture those expressions, quantify those expressions and focus them back on the avatars,” Skipper said. “The software for virtual humans is getting pretty good. The gaming industry is driving that market.”

Gallimore said the biggest challenge is understanding how to develop the underlying communication models and facial expressions that match what is being said to the virtual human and how it responds.

Multiple versions of the virtual human will be developed so as to account for variations in behavior within the culture.

The virtual humans might also be helpful to traveling business representatives or emergency disaster-response workers. And avatars representing other cultures could be developed.

As the soldiers advance in the training, the virtual humans will be programmed to give off mixed messages. For example, they may convey agreement through words and a smile, but the eyes might convey the opposite message. The increased complexity will give soldiers an even better ability to properly react to real situations.

“We will be able to give the trainees immediate feedback so they can become better and better at interacting with people of different cultures,” Skipper said.

The soldiers will also be tested periodically to see how much of the training they retain.

The researchers will then test the perceptions of two groups of soldiers – one group that actually experienced real-world scenarios during deployment and another group that only had the virtual experience. The result should reveal the effectiveness of the virtual training.

“Virtual training will likely not be as valuable as real-world experience, but it offers a great, cost-effective and practical alternative,” Skipper said.