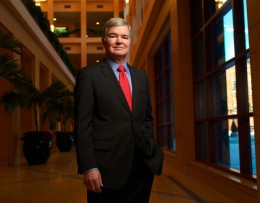 The head of the National Collegiate Athletic Association will speak Monday, Oct. 22, at the Tip-Off Basketball Luncheon to be held in the Berry Room of the Wright State University Nutter Center beginning at 11:30 a.m.

Wright State President David R. Hopkins serves on the NCAA Division I Board of Directors—the most powerful governing body in D-I—and the seven-member presidential advisory group.

“This is a great honor for Wright State to welcome Dr. Emmert,” Wright State Director of Athletics Bob Grant said. “His strong leadership and integrity are helping shape the future of intercollegiate athletics. We are fortunate to have him as part of our Tip-Off.”

Emmert became the fifth president of the NCAA in 2010.

Emmert had been president of his alma mater, the University of Washington, since 2004. Under his leadership, the university obtained $1 billion in research funding, second among all public and private U.S. institutions of higher education.

Emmert is a member of the Higher Education Working Group on Global Issues as part of the Council on Foreign Relations. He is the former chair of the Executive Group of the Worldwide Universities Network and served on the National Security Higher Education Advisory Board.

Emmert was a National Academy of Public Administration Fellow, an American Council on Education Fellow and a J. W. Fulbright Administrative Fellow. He has written extensively on higher education and public administration over a career that spans 30 years.

A Washington native, Emmert earned his bachelor’s degree in political science from the University of Washington and has both a master’s and a Ph.D. in public administration from Syracuse University.