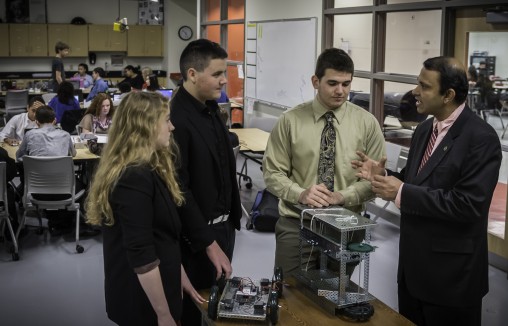 The homemade, poster-sized, student-produced thank-you card pinned to the wall said it all:

“Because of Partners Like You, the Real World Starts Here.”

Hundreds of grateful students packed a hall at the Dayton Regional STEM School on Nov. 21 for a celebration to mark the school’s expansion, renovation and fifth anniversary.

Those being thanked at the dedication ceremony included officials from the state of Ohio, Kettering, the Miami Valley Research Park and Wright State University, a founding partner of the school.

Wright State Provost S. Narayanan told the students he was especially impressed with one of the robotics classes.

“It clearly showed the intellect, the dedication, the motivation of the students there. I just thought our future is in great hands,” Narayanan said. “It’s a very, very competitive world out there. It’s very, very important for us as we look to the future to make sure we are preparing our kids for this very challenging, demanding future.”

Ohio State Sen. Peggy Lehner said it was “awesome” to stand before the students and look out at their faces.

“In many ways we view you as the hope, the future of this country,” Lehner said. “Do us proud, and let’s just keep this growing.”

The renovation/expansion of the school began in April and doubled the school’s size—to more than 70,000 square feet. Project manager Matt Grushon said 23 rooms were added, including a wellness and fitness room. Acoustics were improved. Labs were outfitted with additional sinks, cabinetry and ventilation hoods.

The expansion also enabled school officials to bring a wind tunnel and 3-D printer out of storage for use by students. Outside, there are plans for a fitness trail and wetland.

Birth of the school began in 2007 when Wright State President David R. Hopkins rang up then-Education Dean Gregory Bernhardt and urged him to organize an effort to start a STEM school in Dayton.

The school opened in 2009 and in June 2013 graduated its first class—52 talented seniors bound for the likes of Wright State, Emory, Purdue, Texas A&M, Ohio State, Rose-Hulman Institute of Technology and other schools.

It is one of 12 public STEM (science, technology, engineering and math) schools across Ohio. They are designed to offer students a relevant, real-world education that prepares them for college and the working world. The students participate in inquiry and project-based instruction that marries traditional STEM content with social studies, language arts, the fine arts, and wellness and fitness.

The school is currently home to more than 540 students in grades 6 through 12. The students come from 33 school districts in seven counties.

Common areas in the school are rimmed by computer stations, which draw huddling knots of students. Open classrooms reveal in-progress lessons of everything from art to computer modeling.

Students in the Introduction to Engineering and Design class study under the gaze of influential physicist Albert Einstein, who stares down at them in large, black-and-white photos from the top four corners of the room.

Taylor Butler, a senior student from Fairborn, says the school is so special because of the environment.

Bernhardt, president of the Dayton Regional STEM School Governing Board, said it well.

“I think the future is going to be bright.”