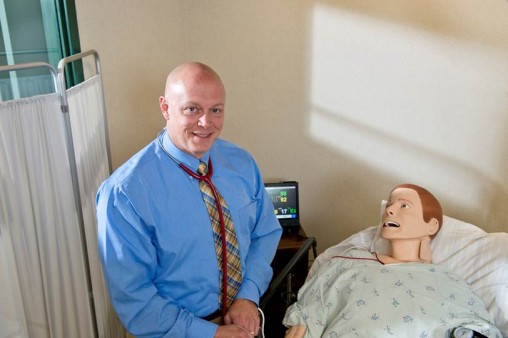 Lt. Col. Tom Wilson is working on his master of nursing degree that will make him a clinical nurse specialist with a sub-specialty in flight and disaster nursing.

It was dangerous. It was exciting. It was rewarding—swooping down from the sky in the battle zones of Iraq and Afghanistan to save wounded warriors.

But Air Force flight nurse Tom Wilson downplays the danger he faced and the sacrifice he made.

“What I do is OK, but it is nothing like the guys who put their life on the line a lot of times without asking why. They just know it’s the right thing to do,” Wilson said. “They’re getting injured, and I have a chance to help them.”

Today, Lt. Col. Wilson is at Wright State University working on his master of nursing degree that will make him a clinical nurse specialist with a sub-specialty in flight and disaster nursing.

“Wright State has the program that I wanted,” Wilson said.

The program is the combined effort of Wright State and the U.S. Air Force. Traditionally, flight nurses have focused heavily on just getting their patients safely from Point A to Point B. The Wright State program puts more evidence-based clinical practice into the training. 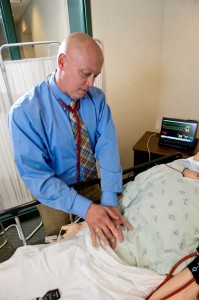 After graduating from Wright State, Wilson will either return to a flying squadron and work as a flight nurse or take a headquarters job, where he would be able to shape new policies and procedures in a leadership role.

For Wilson, who was in Mississippi for the devastation of Hurricane Katrina, Calamityville is all too real.

“Calamityville is what you’ll see,” he said. “You’ll see the gutted buildings. You’ll see the derelict houses, the mess, the trash, people stuck under stuff. For me it’s been a good review, and it’s given me the ability to catch up on things that have changed in the years I’ve been away.”

There are even exercises at night with training stations for bandaging, splinting, treating burns, carrying litters, applying tourniquets and starting intravenous drips.

“The students put on a helmet with a headlamp, they crawl back through areas, they find the victims, and by the light of the headlamp they have to start an IV,” said Dan Kirkpatrick, a clinical instructor at the nursing college. “And it’s a real learning experience for the graduate students on how to put together a disaster exercise because they’ll be expected to do that when they get to their next assignment.”

Framed and hanging on a wall in the classroom building at Calamityville is the front page of the Sept. 12, 2001, edition of The New York Times with a photo of the fiery destruction of the Twin Towers and a headline screaming “U.S. Attacked.” Down the hall, mannequins with missing limbs and gory-looking injuries stretch grimly out on litters, awaiting the attention of nursing students and first responders.

“There’s not a nursing school in the country that offers a course like this,” said Kirkpatrick, a retired colonel who spent 34 years in the Air Force and served as chief nurse at the Wright-Patterson Air Force Base Medical Center. “It really is unique. The students like it because they get to get their hands dirty.”

Many flight-nursing missions are evacuations in response to disasters. But military and civilian approaches to disaster response are different—different language, acronyms, tools, leadership models. So the Wright State program is a hybrid of the two models.

“We wanted each to learn from each other,” Kirkpatrick said.

Among lecturers and guest speakers are experts from the nearby Air Force School of Aerospace Medicine, a ham radio operator, and a woman who does dog search-and-rescue. Students also tour the Ohio Emergency Operations Center in Columbus and the Air Force Aeromedical Evacuation Center at Scott Air Force Base in Illinois.

The program is sanctioned by the Air Force surgeon general, enabling students at the nearby Air Force Institute of Technology to take the courses.

Among graduates of the program is Lt. Col. Karey Dufour, who served on Air Force One as one of four nurses assigned to President George W. Bush and as sole nurse to Vice President Joe Biden. She currently works at the Wright-Patterson Medical Center. Other graduates have been assigned to Air Force bases around the country and in Germany and Japan.

Wilson grew up in Satsuma, Ala., a small town that snuggles up to the Gulf of Mexico. It was a boyhood life of riding bicycles, attending church and hunting with his father.

At Satsuma High School, Wilson played saxophone in the band. That won him a partial music scholarship to the University of South Alabama, where he obtained his bachelor degree in nursing and became certified as a paramedic. It was a world of car accidents, plane crashes and trauma emergencies.

“You didn’t know what you were going to have to do when you got there,” he recalled. “You had pretty much control of what was going on. And it was pretty gratifying to help somebody in a really bad situation, give them a chance.”

Over the next few years, Wilson taught at the university’s paramedic school and worked in a hospital’s emergency room and intensive-care unit as well as at a cardiology practice. He also obtained his master of nursing degree from the University of Mobile.

Then the Air Force came calling—first the Reserves, then active duty.

“The patriot in me thought it was the thing to do,” he said. “Plus it would offer me opportunities to do that I couldn’t normally do as a civilian nurse.”

Those opportunities included traveling and living in Europe. There were also deployments to Iraq and Afghanistan.

After graduating from Wright State, Wilson will either return to a flying squadron and work as a flight nurse or take a headquarters job, where he would be able to shape new policies and procedures in a leadership role.

“Being in the flight/disaster program here, that’s something you’re not going to get anywhere else I’m aware of,” he said.