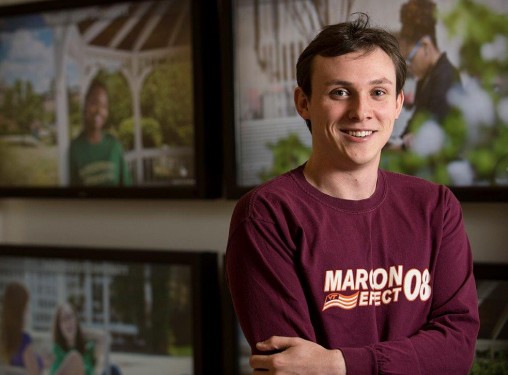 Wright State statistics graduate Whit Alley ’15 landed a job with Nielsen Ratings after answering a question from interviewers that tripped up other candidates. (Photos by Will Jones)

When Wright State statistics student Whit Alley got a high-five from interviewers at Nielsen Ratings, he was pretty sure a job offer was coming.

Alley had just exposed a trick statistics question posed by the interviewers, something none of the other job candidates that day had done.

“The interviewers asked me the question, and I smile a little bit because I’m thinking back to my class,” Alley recalled. “I said, ‘Actually, you can’t say that. You have to ask the question in terms of odds, not probability.’ They were trying to trip me up.”

The interviewers told Alley to make sure to tell his professor Harry Khamis that he had just hit a home run.

“They were proud of me,” said Alley. “It’s something that Dr. Khamis in his class has stressed so heavily. It’s such a common mistake in the statistical field.”

Today, Alley — who graduated in May with his master’s degree in statistics — has that job with Nielsen Ratings, working at the company’s Tampa, Florida, operations.

Alley, who grew up in Virginia Beach, Virginia, describes himself as a “beach kid.” His father works at Dominion Power, while his mother is a labor-and-delivery nurse at a naval hospital.

After high school, Alley enrolled at Virginia Tech and studied computer science in hopes of making video games after he graduated.

“But something with my brain just didn’t click with the material,” he recalled. “I was failing a class; I had poor grades in another class. I started to freak out, so I called my parents and told them I was going to drop out of school. My mom said, ‘No you’re not. You’re going to find something else you like to do.’”

So halfway through his sophomore year, Alley switched his major to statistics.

“I’ve always been good at math, and I’ve always viewed statistics as sort of an applied math,” he said. “Ever since I switched majors, I’ve been addicted to statistics. I can’t get enough of it.”

A professor at Virginia Tech suggested Alley go to grad school, and Wright State’s name popped up during an online search of master’s degree statistics programs. Alley began working on his master’s at Wright State in 2013 and also served as a graduate teaching assistant. 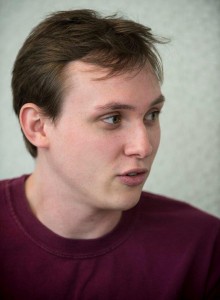 Whit Alley’s long-term career goal is to work as a business or statistical analyst for a video game company in Silicon Valley.

“When people ask me what I study in school, I say statistics and they roll their eyes,” he said. “But it’s really quite interesting because what statistics allows us to do is take real-world data and derive conclusions from it.”

Khamis, now professor emeritus of statistics, said Alley was such a successful student because of his love of — and enthusiasm for — the science of statistics.

“I think that this — in addition to the hard work of studying the material and mastering it — is what extends a student from being technically solid to becoming exceptional,” Khamis said.

As graduation approached, Alley applied to Nielsen Ratings’ Emerging Technologists program, which trains employees to become technical experts in their fields. And following the fateful interview, he had the job, which began June 6.

Nielsen collects data on consumers — what they are watching on television, what they are looking at on the Internet, what they buy at grocery stores. The data is analyzed and interpreted, and the results sold to the producers.

Working at Nielsen will enable Alley to become among the first to spot trends, such as which social media sites are the most popular.

“They will train me in different areas of data science,” he said. “After the two-year program ends, I will be ready for a higher position in the company.”

Alley’s long-term career goal is to work as a business or statistical analyst for a video game company in Silicon Valley.