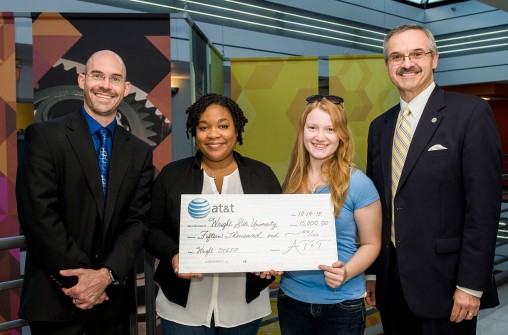 For the third time, AT&T has donated a gift to Wright State University’s College of Engineering and Computer Science in support of its Wright STEPP (Science, Technology and Engineering Preparatory Program). AT&T presented a gift of $15,000 on Oct. 15 to the college.

Wright STEPP is an education intervention program for at-risk and underrepresented students in grades seven to 12. The program enhances students’ preparation for postsecondary education and educates them about STEM-related occupations.

“We want students to make career decisions based on their interests and skillsets and to develop a plan,” said Mitch Heaton, director of development and external relations for the College of Engineering and Computer Science. “Wright STEPP provides a window into STEM and provides unique opportunities so the students can make an informed decision about their career.”

“AT&T wants to support the communities in which it serves,” Romito said. “One way we do this is by contributing to good programs that motivate students, increase high school graduation rates and get students on a path of postsecondary education. And Wright STEPP definitely meets that criteria.”

Approximately 20 students enter the program every year, with a total of 75 to 80 students in seventh to 12th grade. More than 100 volunteers assist in the three-week summer program.

Students in each grade take at least two field trips and shadow or intern with STEM professionals, giving them networking opportunities. One field trip was touring a laser lab.

“The transportation for me was a godsend. I would not have been able to complete this program if there was no transportation,” said Mary Farrow, a Wright STEPP graduate who is now a biomedical engineering major at Wright State.

Kamryn Cosby, a Wright State mechanical engineering student and Wright STEPP graduate, saw a tour guide at a later engineering conference. “I feel like that took me above the next step compared to other interns because I had another connection with her that other students didn’t,” Cosby said.

During their internships, Cosby and Farrow were among the students who experienced flying a drone helicopter.

“In the classrooms we would hear about what people did,” said Cosby. “We wouldn’t be able to actually see it for ourselves.

“You can only learn so much in the classroom. Hands-on is the best way,” said Farrow.

Operated by the College of Engineering and Computer Science for 26 years, the Wright STEPP program is a partnership between Wright State, Dayton Public Schools, Springfield City Schools, Wright-Patterson Air Force Base and local foundations and corporations.

More than 1,400 students have participated in the program, with success indicators including an 80 percent program completion rate and 100 percent Ohio Proficiency Test/Ohio Graduation Test pass rate among program graduates.

“Every student needs to have an opportunity to be successful in the classroom and have opportunities for experience, opportunities for learning, opportunities for research and potentially end up in graduate programs,” said Nathan Klingbeil, dean of the College of Engineering and Computer Science. “It’s synonymous with what were trying to do with Wright STEPP and AT&T.”

“I want to applaud AT&T in recognizing practical concerns … and forward thinking,” said Klingbeil. “The students that come to us feel like Wright State is already a home and … they really have a window to careers.”