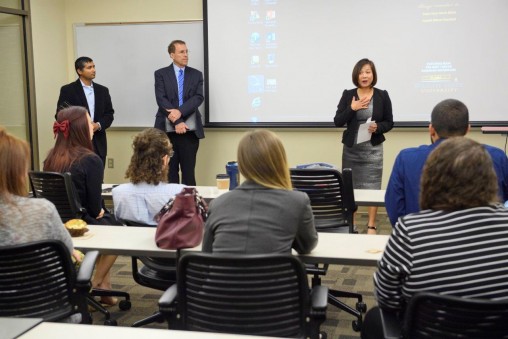 Addressing the teams of marketing students on the debate project are, from right, Joanne Li, dean of the Raj Soin College of Business; Kendall Goodrich, chair of the Department of Marketing; and Kunal Swani, assistant professor of marketing. (Photo by Erin Pence)

If the ideas from Wright State marketing students to generate extra interest in the upcoming presidential debate at the university come to pass, the campus will be peppered with cardboard cutouts of the candidates, papered with debate posters and host to a 5K race with the runners dressed as the candidates.

Students in the Integrated Marketing Communication class were asked to create campaigns to promote the debate and enhance the prestige of Wright State. The three teams totaling 11 students first hosted focus groups to determine how to pique the interest of Wright State students, incoming students and high school students who may elect to attend Wright State.

“The whole agenda of each campaign was to create a buzz and get students involved in the presidential debate,” said Kunal Swani, assistant professor of marketing who assigned the project.

Wright State will host the first general election presidential debate on Sept. 26. The debate is expected to be in the national and international spotlight and attract thousands of media members.

The students studied marketing techniques, identified the target audience, determined which media channels would be used, what the messaging would be and did an analysis of the likely success of their ideas. Swani believes that makes it more likely that the ideas would work.

Although the project was an academic exercise, the ideas could be adopted by anyone. In fact, the winning team was invited by Joanne Li, dean of the Raj Soin College of Business, to work with college faculty and staff and help brainstorm ideas for debate promotion that could end up being funded.

Li especially liked the idea of hosting a campus “Jeopardy!” game featuring debate-related questions. She helped judge the campaigns of the three teams during their class presentations April 29. She called the students innovative and creative.

“I was very impressed,” she said. “I see the talent in you.”

“Great ideas from everyone,” said Kendall Goodrich, chair of the Department of Marketing.

Goodrich said setting up cardboard cutouts of the candidates around campus would be simple and inexpensive.

“You would get a lot of selfies that way, a lot of attention,” he said.

“We’re constantly trying to get students involved in real-world types of projects,” he said.