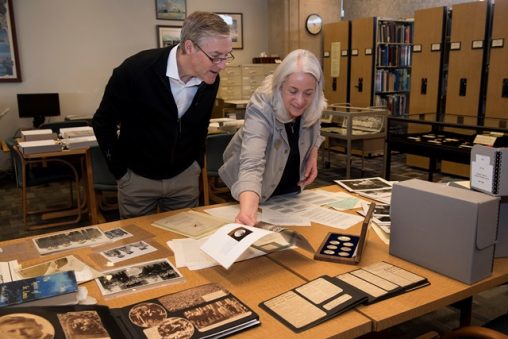 Erik Lindbergh, the grandson of Charles Lindbergh, and Dawne Dewey, head of the Special Collections and Archives, view materials about the famed aviator. (Photo by Erin Pence)

The grandson of Charles Lindbergh, the aviator who won world fame when he made the first solo transatlantic flight from New York to Paris in his single-engine Spirit of St. Louis in 1927, paid a visit to Wright State University to peek at film, photos and documents related to his famous grandfather.

Erik Lindbergh came to University Libraries Special Collections and Archives on April 18 to pore over documents and photos and view a one-of-a-kind home movie clip of Charles Lindbergh’s visit to Dayton in 1927 to meet with Orville Wright.

Lindbergh toured the archives along with Stephen Wright, great-grandnephew of the Wright brothers, and Tony Sculimbrene, executive director of the National Aviation Heritage Area.

“This is fascinating,” said Lindbergh. “I could spend the whole day here.”

Dawne Dewey, head of the Special Collections and Archives, said Lindbergh’s visit illustrates the importance of the collections at Wright State.

“When we can host people like Erik Lindbergh or David McCullough or Tom Hanks and countless others from around the world who are interested in the history that is preserved here and what we’re doing to make it available, it solidifies our position as a really important source for aviation history,” she said.

Charles Lindbergh’s transatlantic achievement sparked interest in commercial aviation, and Lindbergh devoted much of his life to promote it.

“Everybody knew who he was and what he did and wanted to get close to him,” said Dewey. “It’s the thrill of it. All of these people back then are witnessing something that had never been done before and seemed impossible to do, and he did it by himself.”

Lindbergh came to Dayton to pay his respects to Orville Wright on June 22, 1927, less than a month after Lindbergh’s transatlantic flight. The Wright State archives has a Kettering family film clip of Lindbergh arriving at Wright Field, meeting with Orville Wright and being driven away.

A large crowd was awaiting them in downtown Dayton, but they skipped the crowds and instead drove to Hawthorn Hill, Wright’s Oakwood home. However, people began showing up at Hawthorn Hill, peeking into the windows and trampling the flowerbeds to try to get a glimpse of Lindbergh. So he appeared briefly on a small upstairs balcony and waved to the crowd. 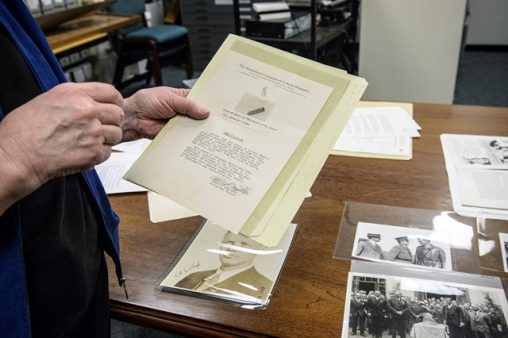 Dawne Dewey displays a biography of Charles Lindbergh that features a small piece of the Spirit of St. Louis. (Photo by Will Jones)

Erik Lindbergh called the video “amazing,” saying it is in remarkably good condition. He added that he was curious to see how his grandfather reacted to the crowds in the weeks following his flight because he had become “completely overdosed” on the attention.

Wright State’s Special Collections and Archives houses one of the most complete collections of Wright material in the world. It includes the Wrights’ own technical and personal library, family papers and other documents detailing the lives and work of Wilbur and Orville Wright and the Wright family.

In addition, the archives has a National Geographic magazine article published in 1934 that was autographed by Lindbergh and his wife, Anne Morrow Lindbergh, who authored the article.

“Very rare that they signed anything,” said Erik Lindbergh.

An International Encyclopedia of Aviation Biography of Lindbergh includes a small piece of fabric from the Spirit of St. Louis that was removed from the plane when it was being repaired following its transatlantic flight.

There is also a record of a flight personnel medical examination of Lindbergh in 1963 by Lockheed Aircraft Corp. that includes Lindbergh’s electrocardiogram and a thank-you letter from Lindbergh to the physician regarding Lindbergh’s decompression in an altitude chamber.

“My experience in your chamber tends to confirm my belief that a properly trained pilot has plenty of warning to put on his oxygen mask following the start of a decompression,” Lindbergh writes.

Erik Lindbergh was fascinated by the letter.

“Oh my gosh. Is it possible to get a copy of that?” he said. “That would be fantastic.”

Lindbergh, 52, is an aviator and adventurer. In 2002, he honored his grandfather’s historic flight by retracing the journey in his own single-engine aircraft, raising more than $1 million for charity.

Lindbergh was in Dayton for a meeting of the SAE (Society of Automotive Engineers) International’s’ aerospace technical committee and for the Doolittle Tokyo Raiders reunion at the National Museum of the United States Air Force.

Following his tour, Lindbergh indicated that the Special Collections and Archives is a treasure for Wright State.

“You just get to live in this history,” he said. “It’s extraordinary.”