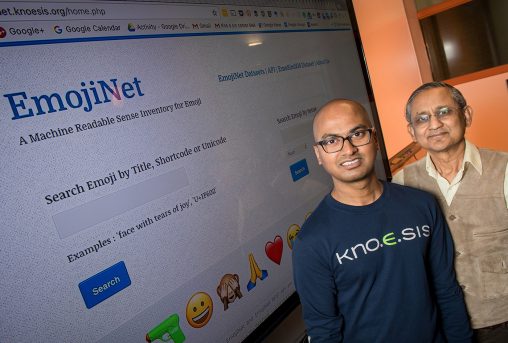 Emojis have become a language of their own among smartphone users.

There is a smiley face and a frowny face, clapping hands, thumbs up, thumbs down, hearts, kissy lips and thousands more. Emojis have grown to a number of 2,766, according to a Wright State University representative.

Wright State University researchers have created a new database that more precisely defines the meaning of each emoji, and promises to improve communication between those that send and receive them, according to a school representative. The database is now being used by the largest group of computer scientists on the planet, according to the school.

“Kno.e.sis is getting the attention of researchers in the computer science field and leaders in the computer science industry, such as Google and Microsoft, who are working on building algorithms that can understand and interpret emoji meanings,” said Amit Sheth, who oversees the research effort as LexisNexis Ohio Eminent Scholar, and executive director of Wright State’s Ohio Center of Excellence in Knowledge-Enabled Computing, or Kno.e.sis.

Emojis, derived from Japanese “e” for picture and “moji” for character, are pictures of faces, expressions, gestures, animals, sports, food and many other images designed to send a visual electronic message. Studies have shown that emojis are taking over language used on social media. They have become widely used to enhance the sentiment, emotion and sarcasm expressed in messages, growing in popularity on Facebook, Instagram and Twitter, the school representative said.

According to the school representative, the use of emojis increased a whopping 777 percent in 2016. Facebook and Facebook Messenger process more than 60 million and 6 billion messages with emojis per day, respectively. In 2015, nearly half of the photo comments posted on Instagram contained emojis.

Sanjaya Wijeratne, a Ph.D. student in computer science at Kno.e.sis, developed EmojiNet, a comprehensive resource for associating meaning with emojis, the school representative said. What dictionaries are to language, EmojiNet is to emojis.

“Emojis have become a new language,” Sheth said. “And they are highly nuanced. There are options for a more precise expression compared to doing a text. And they can be artfully ambiguous.”

The idea for EmojiNet occurred when Wijeratne was working on a project about how street gangs use social media.

“They used emojis in a completely different way than the general population,” he said. “The most popular emoji used by gangs was the gasoline pump because ‘gas’ is a slang term for marijuana. So that’s when we realized that emojis had different meanings based on different contexts.”

Wijeratne and his fellow researchers first went to highly regarded emoji websites, and collected keywords emoji users use to describe what they believe to be the meaning of each emoji and how they use it. Those keywords were then automatically linked with online dictionaries, such as the multilingual BabelNet, that can be read and processed by computers. That database became EmojiNet.

“It’s ultimately up to the community of users as to what the meaning of an emoji is,” Sheth said. “That means you have to rely on a community of people for the keywords.”

EmojiNet can be searched using Emoji names or codepoints. It provides a list of keywords associated with a certain emoji, helps distinguish between similar-looking emojis and shows how a certain emoji looks on different platforms. The database is extremely helpful to computer scientists working on building emoji-related apps and emoji keyboards. And it may help social scientists and psycholinguists to study how different populations use emojis, a school representative said.

“The tool that allows you to pick the emoji requires the kind of thing Sanjaya has developed: EmojiNet,” Sheth said.

Wijeratne said the most challenging thing in trying to identify the real meanings of emojis through keywords, was to filter out the “noise.” For example, people who use the “heart” emoji to express love, would often use their partner’s name. So those keywords had to be filtered out.

EmojiNet was spotted by the Google company Kaggle, which made it one of its featured datasets, enabling the world’s largest community of computer scientists to use it to solve problems related to the understanding of emojis. EmojiNet has since become among the top four percent of the most popular datasets, the school representative said.

EmojiNet was also recently featured in two articles: one in Psychologytoday.com, by Marlynn Wei, a Harvard- and Yale-trained psychiatrist, and another by Emoji Foundation, a major resource focused on emoji interpretation and applications. Wijeratne and Sheh are now working to organize the first international emoji workshop at a premier venue for publishing computer science-related research, according to a school representative.