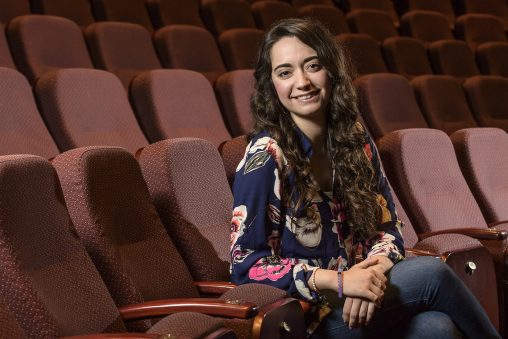 One college degree is nice. Two are even nicer. And when you get them at the same time — by combining your love of acting and of Spanish — you have the story of new Wright State University graduate Julia Gomez-Cambronero.

Gomez-Cambronero said it was challenging pursuing two degrees at the same time and a trick to schedule and juggle all of the necessary classes while holding down a part-time job in the Department of Modern Languages.

“I wouldn’t have done it if I really didn’t love it. I would have just thrown in the towel one year in,” she said.

Gomez-Cambronero’s parents were high school sweethearts in a Spanish town called Manzanares, near Madrid. Her father would tell her mother he wanted to move to America and study cancer.

“And then it happened,” said Gomez-Cambronero.

Her father, Julian Gomez-Cambronero, is a biochemistry and molecular biology professor at Wright State and a Brage Golding Distinguished Professor Award recipient. He and his team discovered a key protein that plays a critical role in the development of breast cancer tumors and the spread of the disease to the nearby lungs.

Julia grew up in Beavercreek. Her mother is an artist who has acted in theater, plays the guitar, writes poetry and paints.

“My bedroom is like a whole art gallery of her paintings,” Julia said.

Gomez-Cambronero said her parents have been very supportive of everything she has ever done.

“They really instilled in me a curiosity to learn and a mix of the arts and science at the same time,” she said.

Gomez-Cambronero was bitten by the theater bug in middle school, when she performed in a musical in the school cafeteria. The desire to pursue acting as a career occurred after she saw Wright State performances of “The Phantom of the Opera” and “The Light in the Piazza.”

“Oh, I need to come here,” she remembers thinking.

Gomez-Cambronero was also a native speaker of Spanish and took AP Spanish in high school. So when she came to Wright State in 2013, she decided to pursue degrees in both acting and Spanish.

Gomez-Cambronero said she recently discovered a love for her Spanish heritage, something she has infused into her acting. She credits her summer trips to Spain with her parents as helping her find her artistic voice.

Her one-person show at Wright State in 2017 was about her experiences as a daughter of immigrants. Her honors thesis project was a multilingual one-act play that she wrote in English, French and Spanish. She performed part of her role in “Blood Wedding,” a tragedy by Spanish dramatist Federico García Lorca, in the original Spanish text.

Gomez-Cambronero also found time to study abroad one summer in Spain, taking part in a language-intensive program at the Pontifical University in Salamanca.

“I wouldn’t trade that experience for anything,” she said. “I wish every student at Wright State could study abroad. It just opens your eyes.” 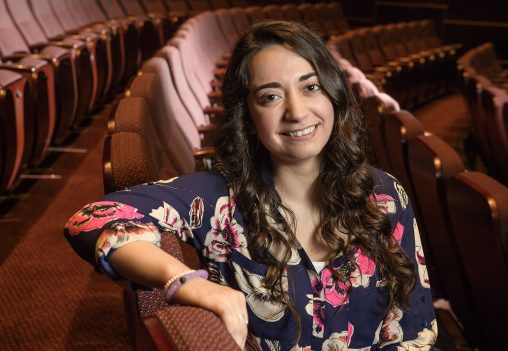 After graduating in April, Julia Gomez-Cambronero participated in the theatre program’s Senior Showcase in New York, then started an internship at the Hope Summer Repertory Theatre in Michigan.

Gomez-Cambronero made her mark on Wright State Theatre productions. She played Mother in “Blood Wedding,” Eunice in “A Streetcar Named Desire,” Regan in “King Lear” and a Witch in “Macbeth.” She also co-directed “Stop Kiss,” a play about a couple who is assaulted on the street following their first kiss.

Gomez-Cambronero says acting is a way for her to open her eyes to a way of life or a story she wouldn’t know through her own experiences.

“I think it’s learning about myself through words that are written or through the lives I will never live. But it’s mostly just finding a different sense of empathy for other stories,” she said.

And she said theater creates a sense of community among the cast, crew, creative team and members of the audience.

After graduation, she went to New York City for the Senior Showcase, in which graduating Wright State musical theatre and acting majors met and performed for New York agents and casting directors and networked with alumni. They also attended a master class with Susan Blackwell, an actress, writer and singer best known for playing herself in the musical “[title of show].”

After that, Gomez-Cambronero was off to Hope Summer Repertory Theatre at Hope College in Holland, Michigan. As part of the theater’s Acting Internship Company, she will perform in the summer musicals while also teaching in the company’s education department.

“I’m excited to implement what I’ve learned at Wright State, do it outside of the university and see how it goes,” she said.

Gomez-Cambronero aspires to create her own multi-lingual and inclusive theater company.

“I would love to jump on the wave and keep creating art for women, for women of color, for people who might not speak English as a first language and keep creating those stories,” she said. “There are stories that need to be told. I also want to meet artists who are as passionate about that as I am.”