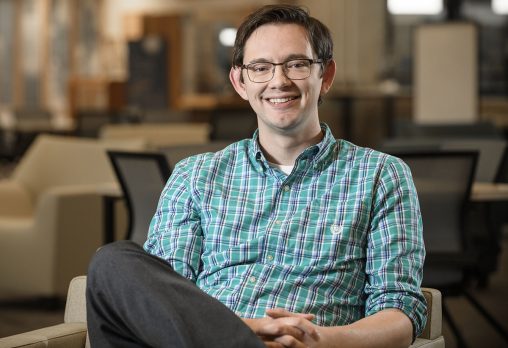 Harris was elected to a one-year term as president during the society’s annual meeting in May. The Society of Ohio Archivists promotes the archival profession and provides professional development and networking opportunities for Ohio’s professional and aspiring archivists.

“I feel very fortunate to have been voted into the role of president by my peers,” he said.

Harris served on the governing council of the Society of Ohio Archivists from 2014 to 2016 and the ad hoc Bylaws Committee. He has also chaired the organization’s Marketing and Communications Committee, which manages the society’s website, member listserv and social media accounts and documents the organization’s events.

He described his involvement in the society as a highlight of his Wright State career. Through the organization, he has made connections across the state while growing professionally. “I think it’s helped me mature in my career quite a bit,” he said.

As president, Harris will oversee the implementation of the society’s strategic plan. He also hopes to create information and new processes to help society members get more involved in the organization.

Harris joined the Wright State Libraries in 2013 as a metadata librarian and was promoted to his current role in 2018. His department, Digital Initiatives and Repository Services, is responsible for managing Core Scholar and collecting and distributing scholarly and historical material of Wright State.

A lot of his work involves describing materials that are digitized from Wright State’s Special Collections and Archives. He produces descriptions for materials and keywords that make it easier to locate the items. He tries to distill the “essence of whatever the object is into something that users can both look for and understand at a glance,” he said.

“By adding that information I’m making it findable and accessible to a larger audience,” he said.

As someone who loves to solve problems, Harris said, he enjoys the challenge of finding the best way to photograph or describe an unusual or obscure item.

Harris also works with Jane Wildermuth, the head of digital initiatives and repository services, to collect and publish on Core Scholar scholarship by faculty, staff and students as well as several online peer-reviewed journals.

Harris enjoys that his work both helps people find scholarship and materials that might not be easily accessible and can help them learn more about the university. “I feel like we’re really contributing to the reputation of Wright State,” he said.

Prior to joining Wright State, he worked as an archival technician the University of Alabama Libraries and interned at the Archives of American Gardens, a branch of the Smithsonian Institute.

His wife, Kayla Harris, works as a library archivist at the University of Dayton. They have two sons with a third expected in July.