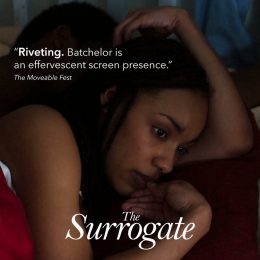 Jasmine Batchelor graduated from Wright State in 2010 with a bachelor of fine arts in acting.

Batchelor stars as Jess, a woman living in Brooklyn who agrees to serve as a surrogate birth mother for her two best friends, a gay married couple. All goes well until a pre-natal test reveals the baby will be born with Down syndrome.

“Jasmine Batchelor turns in one of the year’s best performances, profound work that twists an already propulsive concept into a riveting character study,” says the film industry publication Indiewire. Says Variety: “In Batchelor’s compelling lead performance, good intentions jostle against self-deception. The pathos of Jess’ unstated but overwhelming maternal needs stir empathy even when her actions exasperate everyone around her.”

You can stream “The Surrogate” online through The Neon’s website beginning June 17.

Batchelor, a recipient of a Tom Hanks Scholarship, graduated from Wright State in 2010 with a bachelor of fine arts in acting. While at Wright State, she starred as Sabina in “The Skin of Our Teeth” and as Ruth Younger in “A Raisin in the Sun.”

Following graduation, Batchelor moved to New York City and enrolled in the world-renowned Juilliard School. She recently appeared with some of New York’s most important theatre companies, including Manhattan Theatre Club, Playwrights’ Horizons and the New York Public Theatre.